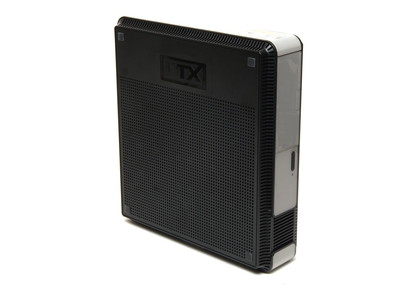 AMD's new open-standard small form factor looks promising. It should hopefully re-ignite interest in the small PC market, as long as motherboard and case vendors take advantage of the smaller motherboard size and implement cool features such as ExpressCard slots.

Note: This product is not rated due to it being a pre-production model.

The form factor of a PC is rarely something that you need to think about, until you try to purchase a PC that's smaller than a mid-tower. That's when tough decisions need to be made. Do you go for a pre-built system from Shuttle or Dell, which, for the most part, use proprietary designs, or do you try and build one using an off-the-shelf micro-ATX motherboard and the smallest case you can find?

If you're a do-it-yourself kind of person, then you'll probably take the last approach and mix and match the best components to suit your needs. The good news is that AMD is thinking about the small form factor PC market and has introduced a new open-standard form factor for motherboards and cases -- it's called DTX -- which it hopes will be adopted by end users and PC companies alike.

DTX isn't a revolutionary design (it hasn't 'flipped the script' like the BTX form factor did to ATX, for example); motherboards based on DTX will actually be compatible with ATX-style cases, and while DTX motherboards may look similar to a micro-ATX motherboard, DTX boards will be smaller. This, in turn, should allow case manufacturers to create smaller enclosures than ever before, or even allow them to pack more gadgets into certain models, without completely cluttering the enclosure with cables.

From a design perspective, DTX boards will still have the same basic components as micro-ATX boards, and the same number of rear expansion slots, but their dimensions will be smaller. Additionally, and this is of most benefit for users who wish to adopt the DTX standard early, DTX boards will be usable in ATX cases.

AMD sent us an engineering sample of its DTX concept PC, which is being used to showcase how DTX can be implemented. It was fitted with PC and notebook-style components, using AMD's Diamond 2, Full DTX-based motherboard, which runs AMD's 690G chipset. It will be up to motherboard vendors to decide what type of features their products will eventually have, and which chipset they will use, but one thing that aroused interest was the provision of an ExpressCard slot on the front of the case. While the Diamond 2 motherboard doesn't feature an ExpressCard facility, we can only hope that motherboard vendors will implement this feature on their new models, as it will give users another option, and a more convenient one, for expansion.

The front of the concept PC also featured USB and memory card facilities, as well as a cooling vent, with more vents located at the rear and top panel above the CPU fan. Our system also had a notebook-style DVD drive, due to the case being only 10cm thick, but it employed a 3.5in, 7200rpm, desktop hard drive so as not to sacrifice performance.

The system itself only had two fans. One was located in the tiny power supply, which was rated at 250W, and the other was located on the CPU. Coupled with the motherboard's fan management capability, it ran extremely quietly, which is an advantage for office workers and for users who want a lounge-dwelling media centre PC.

For the moment, DTX is still in its infancy and vendors are yet to release any products based on this standard. However, motherboards should become available in early 2008, from the likes of Albatron, ASUS, Gigabyte and MSI, while cases, ranging from tiny desktop units to elegant home-theatre components, should become available from Cooler Master, SilverStone and Thermaltake, to name a few.