ATI's newest, most powerful graphics card is a hot performer 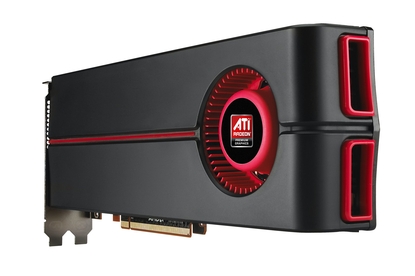 ATI's brand new Radeon HD5870 is one of the most powerful graphics cards on the market. It out-performs the last generation models in all of our tests, and it even edges out NVIDIA's GTX295 in some benchmarks too. Best of all, it does this while only consuming slightly more power at full load than last generation’s graphics cards.

The ATI Radeon HD5870 graphics card is a superlative performer. In most tests it's faster than all of the last generation ATI video cards, including the impressive HD4870, HD4890 and HD4870X2. It even edges out the fastest single-board NVidia graphics card — the GTX295.

The ATI Radeon HD5870 is powered by the RV870 ‘Evergreen’ chipset, with a core speed of 850MHz and a memory speed of 1200Mhz. Our review sample had 1GB of GDDR5 memory with a data rate of 4.8GBps, 30 percent faster than the 3.6GBps of the Radeon HD4870. This card is the first to support the DirectX 11 standard which adds a range of graphical and programming tweaks to any game developers' arsenal. There are even a few DirectX 11-compatible games coming out in the near future, like Codemasters’ DiRT 2.

The ATI Radeon HD5870 is a large card, measuring roughly 270mm in length — the same as the dual-GPU ATI Radeon HD4870X2. One thing that pleasantly surprised us in testings was the Radeon HD5870's reasonably low fan noise. Throughout our 3DMark Vantage and game benchmarking tests, we didn’t notice the noise of the video card fan over the room’s background noise. The card’s minimum 20 percent fan speed is inaudible, and at up to 50 percent the noise is still acceptable. The ATI control panel does have a manual fan control though, so you can check out how loud the card is at 100 percent fan speed for novelty’s sake:

That said, we’d be happy to put up with the fan at its loudest noise in exchange for the kind of performance the Radeon HD5870 delivers. We ran a series of performance tests on a Vista 64-bit machine running an Intel Core i7 965, with 6GB of DDR3 RAM and a Western Digital VelociRaptor (WD3000GLFS) hard drive, installed in an Antec Skeleton case.

On our test system, the Radeon HD5870 produced impressive scores in Futuremark’s synthetic 3DMark Vantage benchmarks, with a Performance score of P12000 and an Extreme score of X9000. This is slightly ahead of the NVIDIA GTX295, which is shaping up to be the Radeon HD5870’s chief rival. Our DirectX 10 gaming results were also strong. The card managed 72.3fps in the DirectX 10 version of Call of Juarez, and Far Cry 2 blazed along at an impressive 57.1fps. Crysis Warhead managed an average of 34.5fps in our time-demos, which is a few frames ahead of the previous best result of 29.2fps of the HD4870X2. This beast of a card can easily handle DirectX 9 games — Half Life 2: Episode 2 benched an overkill of 130.5fps.

If you have a screen with 1920x1200 resolution or lower, this card will be more than enough to satiate your high definition gaming hunger. If you crave more, ATI’s ‘Eyefinity’ solution is a new approach to multi-monitor gaming. This software allows three monitors to be simultaneously connected to one graphics card — while this is nothing new, the ability to run all three monitors as a single virtual monitor during gameplay is. This feature will be a plus for flight sims games — can you imagine having three 24in LCD monitors as a virtual cockpit? ATI is also working on an ‘Eyefinity6’ version of the Radeon HD5870 with, you guessed it, support for six monitors simultaneously.

The ATI Radeon HD5870 offers top-of-the-line performance on a single-core graphics card, while offering lower idle power consumption and a reasonably quiet fan. If you’re looking to build a new gaming rig, give this card some serious consideration.