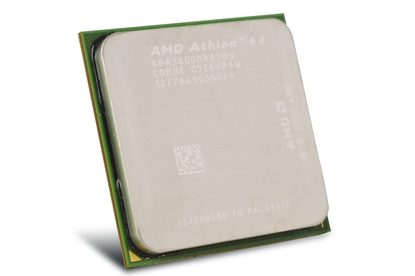 The Athlon 64 X2 3800+ has a big future as the budget model in the X2 range. The performance is better than the vast majority of single-core chips we've seen, especially when it comes to multitasking.

The 3800+ has a different core from the previous X2 processors, and this means there is only 512KB of Level 2 cache. It runs at a clock speed of 2GHz and uses the 939-pin socket that most Athlon 64 CPUs use.

We also wanted to compare it to the system we use to rate every other PC and notebook we review, the WorldBench 5 baseline system. With 1GB of DDR RAM, a 2.2GHz Athlon 64 FX-51 CPU with 1MB of Level 2 cache and a 256MB GeForce FX 5950 Ultra graphics card, we wanted to pit the single-core chip against the dual setup. The overall WorldBench 5 score of 108 is 10 points down on the score achieved by the 4600+ but eight per cent faster than the WorldBench 5 baseline score. What we were more intrigued by, though, was the breakdown of scores in the 12 different applications used in the WorldBench 5 test suite.

Predictably, the 3800+ was behind the 4600+ in all areas, although it was very close in the Office XP, Nero Express 6.0 and Adobe Premiere 6.5 tests, the latter being an application AMD told us that we'd notice a big improvement in. Our focus was on the Windows Media Encoder 9.0 and Mozilla 1.4 combined multitasking test, where the 3800+ was behind the 4600+ but well ahead of the baseline system, proving that two cores really are better than one.

The 3800+ also displayed dramatically better performance than the Athlon 64 FX-51 in WinZip 8.1, a compression utility, Roxio VideoWave Movie Creator 1.5 and, most notably, Nero Express 6.0, halving the time to complete a set of tasks.