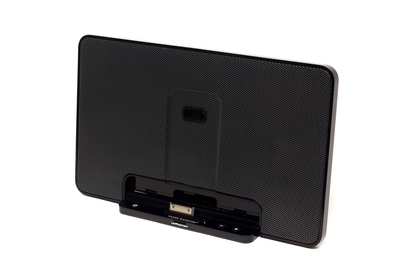 This is a well-designed speaker system that can also act as a dock. However, its sound quality doesn't match its sleek look. The lack of a remote control, hard to press buttons and poor sound quality at higher volume levels means users should give this a miss.

The Altec Lansing iM500 is a thin, lightweight and compact portable speaker system for the iPod Nano. Its size makes it ideal for the traveler. Although the iM500 scores points for its design, the lack of a remote control, hard to press control buttons, and below average sound quality at higher volume levels detract from the overall quality of the product.

The iM500 produced balanced sound at lower volume levels with most musical styles, but it wasn't outstanding. When the volume was raised, distortion became evident and the sound quality deteriorated. Bass, in particular, was distorted on all the musical styles we tried, and without bass or treble controls on the unit, this couldn't be tweaked.

As the bass began to distort, other frequencies merged and the sound became overly muddy. Many similar systems we've seen will distort slightly at higher volume levels, but the distortion from the iM500 was excessive. It requires users to listen at a much lower volume level in order to get clear sound. For parties or for filling a room with sound, the iM500 is not suitable. It's fine for quiet listening and close-range listening.

The iM500's sleek design is its best feature, but even this could've been better. A button in the middle of the speaker cover flips out of the unit's base, which houses the Nano connector and the iM500 controls. These controls consist of a power button and volume up and down controls. Unfortunately, these buttons are very small, are made out of plastic and require a firm press to activate. Aesthetically, the iM500 looks superb when a black iPod Nano is docked. It's finished in glossy black plastic, with a dark grey mesh speaker cover.

The iM500 runs on either AC power (with an adaptor included in the sales package) or via six AAA batteries, located in two separate compartments on the rear of the unit. The rear of the unit also has an auxiliary input for the connection of alternate audio sources, such as non-dockable iPods, MP3 players, portable DVD players and notebooks. A standard audio cable (3.5mm) is provided in the sales package and this simply connects from the auxiliary input to the headphone jack of any other device.

The iM500 also acts as a dock for charging and synchronising the iPod Nano and can be connected to a PC or Mac using a Mini-USB connection.