The budget PC speakers have an interesting design but deliver mediocre sound. 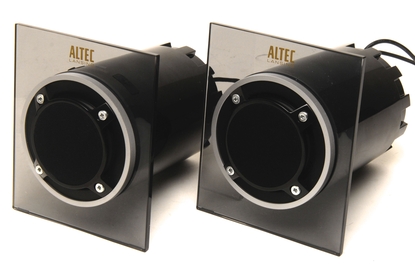 While these speakers will not amaze in terms of sound quality, the design might be of interest.

Altec Lansing’s Expressionist FX2020 speakers have a different design to the company's other model in the Expressionist series, with a design similar to Sony’s 'floating glass' television motif. The speakers' styling sets them apart from other budget PC speakers, but their sound is as mediocre as the rest.

It is an interesting design, with the tubular speaker enclosure — which is roughly 15cm deep and 8cm centimetres in diameter — set into a square piece of perspex. The speakers are connected with a two metre long cord — more than enough for the average office desk — but this is permanently connected so the cable cannot be extended.

Like the Expressionist BASS FX3022, the power and volume controls are located on the right speaker. The system has two 3.5mm inputs for connecting either a PC or auxiliary input; we used an Apple iPod touch (2nd Generation) to test the system’s sound quality.

At lower and middle volumes, the Expressionist Classic FX2020 system provides decently balanced and metered sound with no real preference for bass, mid-range or treble. At comfortable listening volumes the sound is acceptable, but it lacks the liveliness in treble and lower bass that more expensive speakers possess. At higher volumes the sound starts to lose its composure, tending to become ragged and harsh.

The speakers' soundstage is acceptable for music, but gamers may want a little more distinction between stereo channels. As it stands, the Expressionist Classic FX2020 is acceptable for moderate volume music or movie watching, with occasional gaming thrown in.