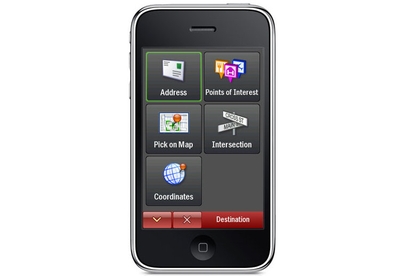 ALK Technologies' CoPilot Live 8 for iPhone app has an excellent user interface and a great map screen, but erratic GPS performance and a few missing features hinder its appeal. With future software updates to correct its issues, this GPS app has the potential to be one of the best available for the iPhone.

ALK is renowned for its turn-by-turn GPS applications on PDAs and Windows Mobile smartphones, and now the company's CoPilot Live 8 GPS application has finally arrived on the iPhone. Competing with similar apps from Sygic, Navigon and TomTom, CoPilot Live 8 for iPhone has a great looking interface but its lack of text-to-speech technology and safety alerts, and its erratic GPS performance are frustrating.

CoPilot Live 8 for iPhone's user interface is impressive, mainly due to its simplicity. When started up (a process taking less than six seconds) the application greets you with a spoken "Welcome to CoPilot Live" message and displays a clean menu box that allows you to immediately navigate to an address, POI (point of interest), contact, intersection or a saved favourite, change the navigation mode or enter the settings menu. We found most POIs we searched for, though some smaller restaurants weren't in the database.

While settings are kept to a minimum to avoid user confusion in Navigon's Mobile Navigator for iPhone, CoPilot Live 8 manages to provide a wealth of settings and functions without cluttering the interface. You can change the map style, choose the direction of the map display, select what POIs to display on the map while on a route, adjust an audible and visual speed limit warning, tweak the turn warnings, and choose to be alerted when certain POIs are nearby.

Although you can't swipe screens left or right like you can with many other iPhone apps, you can pinch to zoom in on the map screen and any text input brings up the standard iPhone keyboard layout. CoPilot Live 8 for iPhone also allows you to navigate by automobile, motorcycle, bicycle or on foot.

Like the rest of the interface, CoPilot Live 8 for iPhone's map screen is bright and very straightforward. Roads are large and clearly labelled and 3D POI icons appear on the map screen along your chosen route. By default the information bar at the bottom of the screen shows the current road you're travelling on, and other information like ETA, speed and time of arrival can be displayed. If you prefer more space on the map screen, you can shrink the bar by tapping the down arrow button on the right side of the screen — this shows only the current street you're travelling on and a much smaller "next turn" icon.

The CoPilot Live 8 for iPhone map also shows speed limits and users can set adjustable speed limit warnings in the settings menu. Unfortunately, the application currently lacks safety alerts such as speed and red light camera warnings, but the dimmed, inaccessible icon in the settings menu suggest these will eventually be added.

The general navigation experience when using CoPilot Live 8 for iPhone is solid, but not outstanding. We had a few issues with GPS performance and stability — though the app takes less than 10 seconds to lock onto a GPS signal in most instances its performance is erratic. Even with a clear view of the sky, the position indicator sometimes lagged behind our real position on the map. This only occurred a few times during testing — it's a common occurrence in nearly all of the iPhone GPS apps we've tested and has a big impact on the navigational experience. The lack of text-to-speech technology is also a downside, even though this will likely come with a future software update. Receiving a phone call is also an annoyance — once you've ended the call CoPilot Live 8 for iPhone will restart but your route is lost. To continue your route, you'll have to select it in the recent locations lists. It's only a few screen taps, but this is far from ideal while you're driving.

On a positive note, CoPilot Live 8 for iPhone's lane guidance feature is excellent. In addition to displaying lane indicator arrows, the app also displays a static image of the junction or exit on the screen when you are approaching it. Voices are also loud and clear and an Australian voice is included. The ability to adjust the length and frequency of audible voice commands is a big bonus.