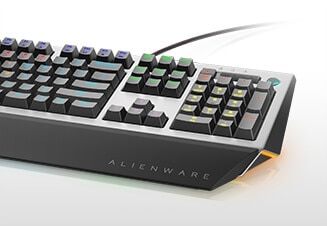 The AW958 looks like a gaming mouse ought to. That’s the short version anyway. It’s got a shiny metal built, plenty of sharp angles and comes lit by an RGB underlight.  Alienware have gone for a more focused design aesthetic here, which fits in nicely with the rest of their product scheme. It’s very utilitarian in its form-factor and the nylon cable feels like it’ll hold up to a fair amount of wear and tear.

The mouse itself certified for 50 million clicks. However, the customizability of the mouse makes the strongest case to choose the AW958 over a more bare-bones offering. It’s easy enough to modify the weight or wings of the AW958 that you won’t dread the trouble and quick that you won’t regret it. Even if the AW958 plays it pretty by the book when it comes to design, the extra dimension of customizability here means you’ll be able to make that conventionality your own. At least, to a degree.

A lot of these qualities are shared by the AW768. Like its clicky cousin, Alienware’s new keyboard goes in on a pretty dead-simple design: it’s basically a large silver slab filled with RGB goodness.

In fact, it’s probably got more buttons than it ought to have. Like the macro keys on the AW958, however, the value here you derive from these inclusions is very much going to depend on how much time and effort you put into them. Personally, I found the volume slider a little clumsy to use but otherwise well placed alongside the mute button. In contrast, I found myself often forgetting the macro keys even existed due to their location. It’s easy to imagine your mileage will vary here.

While the AW958 would glide across my desk with an downright-impressive smoothness, the mouse felt a little unsatisfying to click and worse-still to scroll with. The mousewheel ran the gamut for responsiveness. Sometimes it would spin too easily, sometimes it wouldn’t be sensitive enough. The DPI toggle proved even more frustrating to use. It failed to provide adequate feedback to tell me when I had successfully triggered the toggle, and having to go through each preset until I found the one I wanted got old fast. Sure, it’s functional enough but there’s little flair to be found here.

Likewise, the AW768 also feels a little more “hobby-grade” than “eSports-ready”. As you’d expect, the Brown keyswitches are reasonably satisfying to type on. They're a little less quieter than Blues or Reds. Overall, it feels like a product for players who want take their gaming seriously - but maybe not that seriously.

If you want a good gaming keyboard and mouse set but don’t want to make the investment in jumping to something professional-grade, Alienware’s AW958 Mouse and AW768 Keyboard seem like a safe, reliable and conventional choice.

In design as well as performance, they deliver pretty much as expected. Getting into gaming gear can be daunting and while these aren’t the sharpest knives in the kitchen, they cut well enough to make for a comfortable option nevertheless.