There's no doubt that the Alienware Aurora is a great gaming PC. It's fast and interesting, and definitely fun to use. However, it's very expensive. You pay a hefty premium for features that not many other pre-built systems offer, such as excellent tool-less drive bays, custom light patterns and motorised vents. If you have extra-deep pockets, then go for it, otherwise, get your mates to build you something cheaper, yet just as fast.

The Alienware Aurora represents a massive investment for a pre-built desktop PC, but it's an investment that should provide a solid computing foundation for at least the next three or four years (if not more). It's powered by Intel's current cream-of-the-crop Intel Core i7 CPU (the non-Extreme version, that is), comes stocked with 16GB of RAM and it can effortlessly run any game on the market thanks to its GeForce GTX 590 dual-GPU graphics adapter. Not only that, it includes a 512GB, blisteringly fast, solid state drive (SSD), which also ensures that the PC can boot up in less than 20sec. But is it all worth it?

This is the type of system that will prompt your tech-savvy friends to ask you why you didn't consult them before purchasing a computer: "we could have built you one with the same specs for a lot less money", they would say. And they would be right. Generously pricing the CPU, graphics card and solid state drive at $1000 each, and then throwing in an extra $1300 for a motherboard, RAM, Windows 7, a sturdy case, a blu-ray writer, a good quality power supply and comfortable input peripherals, the total for a similar PC to the Aurora would be just over $4300 (and remember, we are erring on the side of caution with this pricing).

But with the Auroa costing $5860, where does that extra $1500-odd go? You could make a case that it goes towards the design of the machine, but this design has been around for a few years already (see our review of the Alienware Aurora ALX from 2009). So then you're left with labour costs, delivery and warranty and support. The Aurora comes with a 3-year on-site warranty that's probably worth a couple of hundred dollars.

We think the exorbitant price of the Aurora buys you an experience as much as it buys you a computer that can perform just about any task. The AlienFX lighting system, the motorised vents, the plastic-moulded shapes that create the alien-esque figure around the enclosure, the backlit keyboard with extra shortcut keys; most people will like that stuff because it's something different and interesting (although others might say it's just corny). Being able to choose from a palette of colours for the lighting system allows you to completely customise the look of the case to suit your mood and surroundings, and you can even set the lights up so that they morph from one colour to another. 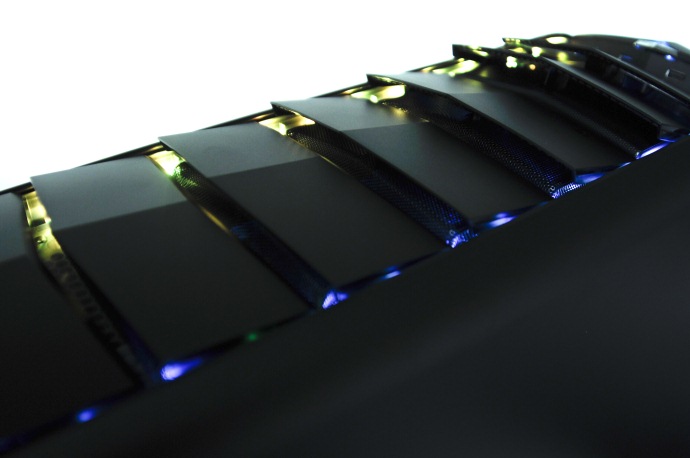 The air vents at the top of the case are motorised and can open automatically when they detect that the fans are working too hard, allowing more cool air to enter the chassis.

Indeed, part of owning the Aurora is using the Alienware Command Centre program to change your computer's attitude by changing its lighting scheme. You can even switch the lights off and put the PC into stealth mode. But that would be a waste. Lights adorn the edges of the case at the top and the front, and the side panel also has an area that lights up, which exposes an alien-language pattern. On the inside, the case has more functional lights: it includes bright white LEDs that are always on (even when you unplug the system from the wall, thanks to two hidden AA batteries) and they allow you to easily see what you're doing when you're working on the system. In particular, lights in the hard drive bays make it a cinch to add or a remove a hard drive, even in darkness. 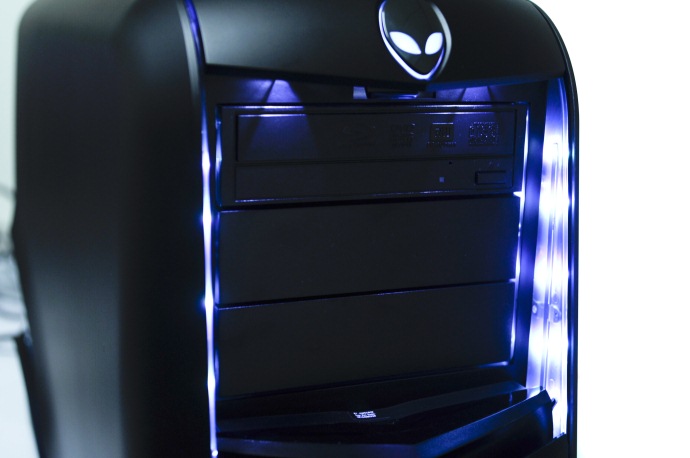 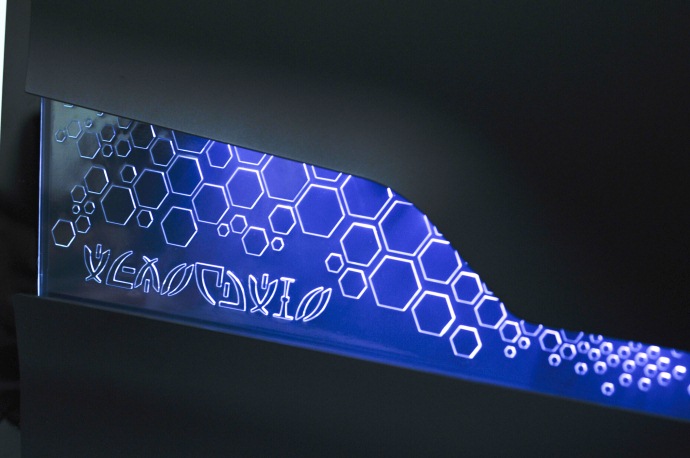 The lights can be customised with the colour scheme of your choice.

That's another key thing about this system: while it's a pre-built system and its case has a custom design and layout, it's still very easy to work on (although the plastic parts will be a pain if you need to remove them to clear dust or perform more serious maintenance). The case itself is big and heavy and it can be difficult to manoeuvre into place without help, but it's not a tall case. It supports micro-ATX motherboards rather than full-sized ATX boards, but it's a deep case, which is what allows it to support long, high-end graphics cards. There are USB 2.0, USB 3.0 and audio ports at the top of the case, but a memory card reader was not included in our system. The rear has five more USB ports, analogue audio, digital audio and Gigabit Ethernet ports.

The side panel pops off when you lift the rear lever and it exposes a machine that is put together in a seemingly messy way. It doesn't have a fully modular power supply or hidden cables like the Origin Genesis Z68 gaming PC, for example. In fact, the Aurora's cabling isn't even as neat as Alienware systems of the past; it looks very much like a typical Dell assembly effort on the inside.

This isn't a bad thing entirely. After all, there isn't a big window in the side panel for you to see inside, and the cables don't get in the way of the fans. Cables are tied away as much as possible, but some are left loose to aid the upgrade process. If you want to add a second graphics card in the future, no problem, the power cables for that are already present and feeding off the current graphics card. If you want to add another device in the 5.25in drive bay, no problem again, as an extra SATA cable and power cables are left dangling at your disposal.

We're in love with the drive bays though. They face the side and they are completely tool-less (if you use 3.5in drives rather than 2.5in drives) and cable-less. You don't even have to remove the drive trays to install a new drive: simply insert new drives into the cage and they will lock into position. The system supports RAID arrays, but our test system came with only one drive: a super-fast, 512GB solid state drive. 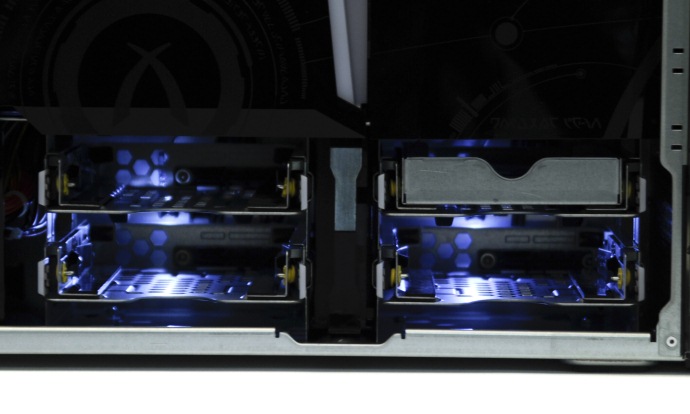 The fixed drive bays are convenient and always lit up. Drives can't be hot-swapped.

This drive (model number MTFDDAK512MAM-1K) is a Dell-branded device with a 6Gbps (SATA 3) interface and a formatted capacity of 476GB. It put up very fast speeds for a single drive: 465.5 megabytes per second (MBps) when reading, and 255.5MBps when writing data in CrystalDiskMark. Furthermore, in our own file duplication tests, the drive put up a blistering rate of 354MBps, which is even faster than the result we got out of the SSD RAID 0 array in the Origin Genesis z68 gaming PC in the same test. Simply copying small- or medium-sized files will happen in only a few seconds and will be barely noticeable. 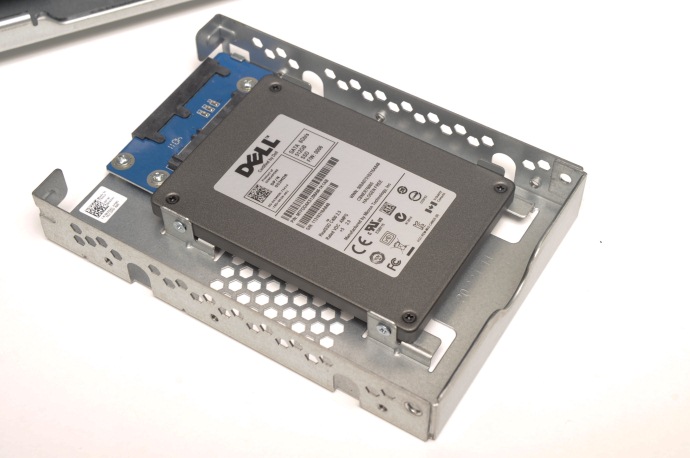 One of the fastest SSDs we've seen to date.

What powers the Alienware Aurora is an Intel X79 Express chipset-based motherboard with an Intel Core i7-3930K CPU, which has six cores in addition to Hyper-Threading. This gives it the ability to process 12 software threads simultaneously, making it a killer CPU for multi-threaded applications and super-heavy multitasking. It has a regular clock speed of 3.2GHz and a Turbo Boost of 3.8GHz, which Alienware has conservatively overclocked to 3.9GHz. It has a liquid cooler with a fan-cooled radiator and pump attached to the rear of the case. The fan in our test PC was noisy, but we're expecting that to be an anomaly. 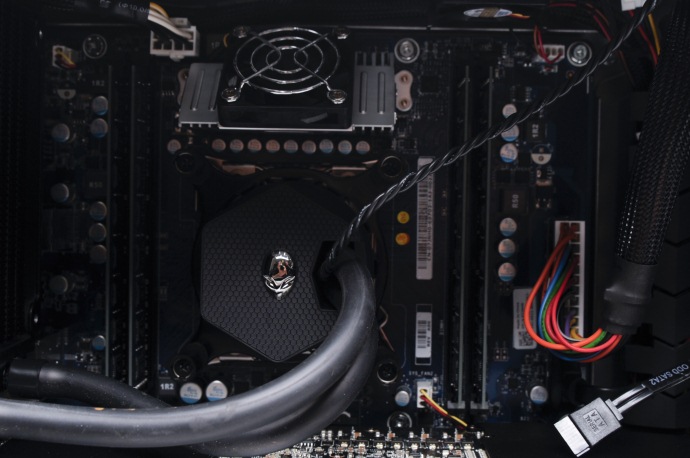 The liquid cooler on the CPU.

Joining the CPU is 16GB of 1600MHz, DDR3 SDRAM, an NVIDIA GeForce GTX 590 graphics adapter and the aforementioned 512GB solid state drive. In our performance tests, this configuration put up good numbers. Our Blender 3D rendering test was completed in only 14sec, our iTunes MP3 encoding test in only 35sec, and our AutoGordianKnot DVD-to-Xvid conversion in only 28min. The straight-line speed of the Aurora isn't as good as that of the Origin Genesis z68, which was overclocked to 5GHz and therefore completed the DVD-to-Xvid test 6min quicker than the Aurora. However, when it comes to multi-threaded performance, the Aurora wins hands-down with its 12 threads.

For gaming, the top-of-the-line GeForce GTX 590 graphics adapter will have no trouble running the latest titles in Full HD and with high image details selected. It managed to run Battlefield 3 in Ultra mode without any problems, recording over 50 frames per second (fps) in this test. In 3DMark06, the Aurora's result of 28865 is a mammoth one. In 3DMark11, it achieved a mark of P9716, which is also very good.

Under a maximum graphics load, the machine drew 528W of power; when the system was idle or just used for basic Web browsing, it drew up to 150W, and while switched off but plugged in to a wall outlet it consumed 2.5W. The power supply has a hefty rating of 875W.

If you knew how, you could always build a machine yourself with the same capabilities as the Alienware Aurora, but you wouldn't get the overall experience that this package is trying to convey (unless you're also modder, in which case you probably wouldn't be reading this anyway). It's a very fast machine thanks to its top-flight components, yet it's also quite upgradeable. We like the performance it offers, as well as its aesthetics, although we realise it probably won't be for everyone. What's definitely not for everyone is the price, which we think is just too high for what you're getting.