A hardcore gaming PC with deadly looks and fast performance Not everyone will like the appearance of the Aurora ALX, but there's no denying that it's a powerful machine that will please most serious gamers. We like its design and construction. Although it's not a perfect PC, we think it's a worthy machine for those who can afford to splurge on it.

Alienware's Aurora ALX is a gaming PC with plenty of speed, flair and attitude. It's the sort of system that polarises people. Some will love its audacious design and extravagance — such as automatically opening air vents — others will mutter that the machine would be a lot cheaper if it had a more basic case. The fact is, though, the Aurora ALX is designed to appeal to a certain type of gamer — a gamer who wants a machine that looks as aggressive and willing to kill as the characters in their first person shooters. To this end, we think it delivers.

While the moulded plastic that clings to the metal case gives the Aurora ALX gaming PC its alien-like appearance, the inside is also far from normal. In fact, the inside of the case shows just how much thought has gone into the design of the system. What we like most is the construction of the drive bays: they face outward and are tool- and cable-less. The mounting points for the SATA data and power interfaces are secured inside the bays, and all you have to do if you want to add another hard drive is slide it in and make sure it clicks into place. It's a very neat system and it means there are no hanging cables to be seen anywhere. The only way the drive bays could be made better is if they were hot-swappable. As it stands, you have to switch off the system in order to perform upgrades. 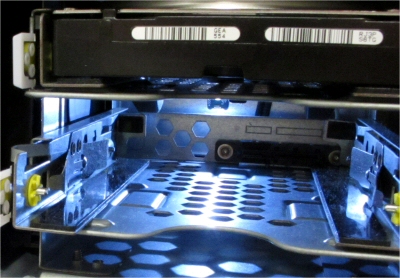 We like the outward-facing drive bays in the Aurora ALX. They're tool-less and cable-less.

Another thing that's obvious when you look inside the machine is the small motherboard. While the Aurora ALX is a very powerful system, it has a micro-ATX motherboard. This has two full-sized graphics slots that can accommodate an ATI CrossFire configuration for up to four GPUs, but it doesn't give you a chance to insert any other expansion cards, such as a sound card or digital TV tuner. Luckily the ALX has eight USB 2.0 ports that can be used to add other components.

Ordinarily a micro-ATX motherboard would allow a manufacturer to create a PC with short stature. While the Aurora ALX isn't as big as it would be if it had an ATX motherboard installed, it's still a big PC. It will require a lot of desk space or floor area.

The CPU is liquid-cooled via a reservoir that's mounted at the rear near the air vents at the top of the case. Unfortunately, the graphics cards are not cooled with liquid, so you'll still hear their fans roar into action once you load up your games. A shroud sits in front of the graphics cards to make sure that air moves efficiently through the rear of the system. The vents at the top of the case are perhaps the funkiest feature of the Aurora ALX: they open automatically when the CPU reaches a certain predetermined temperature. It's quite cool to see the vents open and close by themselves as you use the system. If you place the system on the floor, you'll have to remember not to rest anything on it. 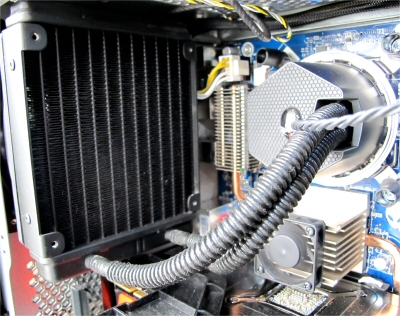 The liquid-cooled CPU, reservoir and radiator.

Lighting is another big part of the Aurora ALX: the system has lights pretty much everywhere. The most impressive are the ones on the side panels, which illuminate the alien-like pattern on the plastic. The left side panel opens up easily once you lift the rear-most vent to unlock it, and an impressive aspect of its design is that cables haven't been used to supply power to the panel's lights. Instead, it uses contacts that are mounted on the power supply at the bottom of the system. A drawback of this design is that if you constantly take off and replace the side panel, it could end up slightly out of shape. This means that the connection to the lights might not be made cleanly. 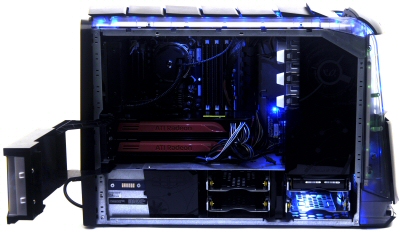 The Aurora ALX has no shortage of lights. We'd like an option for a clear side panel, because the inside of the case is definitely interesting to look at.

Other little things that stand out in the Aurora ALX's case include a drop-down door that reveals the optical drive once you press on the little alien head; there are also backwards-facing USB 2.0 and audio ports at the top of the case. This is supposed to minimise the chance of cables falling in the way of the optical drive, but we think the ports are somewhat awkward to access on a regular basis. 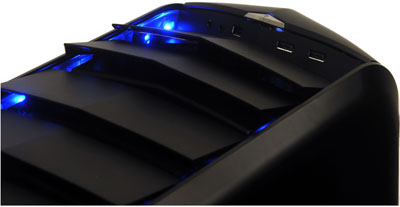 The USB ports at the top of the case face backwards and can be a little awkward to use on a regular basis. This shot also clearly shows the vents that automatically open when the CPU reaches its predefined threshold temperature.

Powering the Alienware Aurora ALX is an Intel Core i7 920 CPU that runs at 2.67GHz and features automatic overclocking to 2.93GHz. The CPU runs at 2.67GHz until a program that requires the full power of the CPU is launched, at which point the speed bumps up automatically. Seeing as the Aurora ALX is liquid cooled, we would have liked to have seen some more speed from this CPU; perhaps up to 3.2GHz.

More than its speed, though, the Core i7 920 is about parallel processing. It's a quad-core CPU with Hyper-Threading, which allows it to process up to eight threads at once. The machine also comes with 9GB of DDR3 SDRAM, dual 1GB ATI Radeon HD 5870 graphics cards, which are set up in a CrossFire configuration, and a 1TB, 7200rpm hard drive. This configuration, along with a dual-layer DVD burner, costs $5655. That price is nothing to scoff at, but you will get a machine that will serve you well for many years. Currently, it's one of the fastest PCs you can get not only for gaming, but also for image and video editing (although you might want to add some more hard drives for assets). It's a lot faster than the first Core i7 920-based system that we reviewed almost a year ago, Acer's Aspire M7720.

In our WorldBench 6 benchmark, which runs everyday office and media encoding applications, it recorded a score of 127, which is only slightly faster than a system with a Core i5 750 CPU. However, you can really see the difference in performance when all eight of the virtual cores are in action: in Blender 3D, it recorded a time of 29sec, and this is one of the fastest times we've seen in this benchmark. Only the Intel Core i7 965 has completed the Blender test quicker (24sec). The system's hard drive performance is also very good, recording a transfer speed of 54 megabytes per second in our tests; this is about 20MBps faster than a typical Core i5-based machine.

The gaming prowess of the Aurora ALX is evident in its 3DMark06 score of 18,809. It ran Crysis: Warhead and Far Cry 2 easily at 1920x1080 with anti-aliasing enabled. It recorded well over 50 frames per second in these games during our tests. Indeed, it won't struggle when you run any of the latest titles, and you'll be able to turn the image quality way up.

A control centre application lets you to change the colours of the PC's case and keyboard lights. Furthermore, the action of the vents can be changed: they either open automatically or can stay open permanently. The keyboard also features a glut of dedicated gaming keys along the left side and the top-left. You can use them to select weapons and other items during a game. The keys are illuminated and easy to see in the dark, so you don't have to play with the lights on.

The keyboard takes up two USB 2.0 ports and lights up so you can easily hit keys in the dark.

There's no doubt that the Aurora ALX is fast and can handle any game you throw at it. It's also powerful enough to be used for other pursuits, such as video and image editing, as well as 3D rendering. But the thing that is likely to draw you in or push you away from this machine is its design, even more so than its $5655 price tag. We like its design, especially on the inside, and think that the external moulding is suitable for people who want a gaming machine that looks the part. Put simply, this is a niche PC that's very powerful but won't appeal to everyone — not even all gamers. Those of you who do like the way it looks will end up with a PC that should keep pace with gaming developments for at least a handful of years.