The coolest notebook in the galaxy 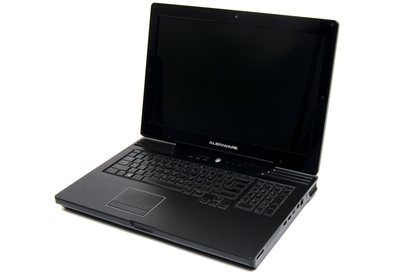 High frame rates and fast performance are hallmarks of this high-definition notebook, but it also looks fantastic. If you don't already have the funds for it, you might want to start saving like you've never saved before!

When the gaming stakes are high, you need a laptop with components that can deliver a high level of performance. Alienware's Area-51 M17X is one of those laptops, but you'll need to empty your mattress of your life savings in order to buy it.

It's a high-definition laptop equipped with a bright, 17in, 1920x1200-resolution screen, a Blu-ray player, an HDMI port and an optical audio output. But it's the Area 51's looks that'll garner most attention. It has a smooth matte black finish, a backlit keyboard and an outlined touchpad, as well as illuminated shortcut buttons and logos.

You can customise the colours of the illuminated areas using the supplied AlienFX Editor software, so you can give the unit a fresh look every time you get bored of a particular combination. The unit's illumination is sure to turn heads at LAN parties, giving you an advantage over those who are distracted by it; it's also a practical design for using the laptop in a dark environment, as the lights won't tire your eyes.

But for $7000 you want a lot more than a cool-looking keyboard and touchpad, and below the surface of the Area 51 lie components that are almost of the highest order for a notebook. An Intel Core 2 Extreme X9000 is the CPU of choice; this is a dual-core CPU that runs at 2.8GHz. It's partnered with 4GB of 667MHz DDR2 RAM, but this isn't quite fast enough to match the 800MHz front-side bus speed of the CPU. Still, in the Blender 3D rendering test these components combined to finish a two-threaded rendering job in 1min 4sec; in iTunes they took 1min to encode 53min worth of WAV files to 192Kbps MP3s. Both results are on the money for a 2.8GHz CPU such as the X9000, so you'll definitely get a lot of grunt out of this notebook when it comes to content creation.

With two NVIDIA GeForce 8800M GTX graphics cards installed in SLI mode, you'll also get a lot of zip when gaming. The unit scored 12,348 in 3DMark06, which is about 25 per cent higher than it would have scored with only one graphics card. In Battlefield 2 it averaged 80 frames per second, while in GRID it averaged 27fps. GRID was very smooth during regular gameplay, so the slightly slow rate didn't hinder the movement and control of the cars. These results were obtained while playing at the native 1920x1200 resolution of the monitor, so you'll get even more performance if you play at a lower setting.

The unit's keyboard is comfortable to use, but does feel a little wobbly towards the middle. The touch-button shortcuts above the keyboard are a little hard to manipulate, and it sometimes took us a few goes to get them to change settings. The shortcut buttons can be used to toggle the unit's Bluetooth and Wi-Fi modules, as well as bring up the editor for the colour schemes and notebook performance profiles.