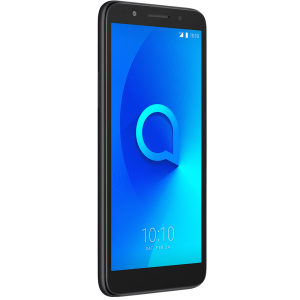 If you’re looking for a throwaway device with all the functionality that modern Android offers, this’ll tick that box - but it won’t look pretty.

In year’s past, Alcatel have crept upwards towards the mid-tier of the smartphone space. This year, they’re looking to consolidate their presence in their home turf. And the TCL-backed brand talk a good game, specifically when it comes to ticking boxes and nailing the essentials.

Even as more and more Chinese brands are entering the Australian, Alcatel sticking to their guns and a broader commitment to offering dirt-cheap devices that tout feature-parity with fare well above the alternatives playing in the same $100-$300 price bracket.

The Alcatel 1X represents ground-zero for this particular approach - and while the cut-corners involved lead it to all-but-inevitably offer imperfect results, there’s still something to really admire about it: a kind of gutsy, if fraught, ambition.

Unfortunately, ambition and ticked boxes can only take you so far and - for me, at least - the Alcatel 1X’s achievements never quite manage to overshadow its caveats.

Read more The Alcatel 1, 1C, 1V and 3V get Australian pricing and availability

Read more Everything You Need To Know About Android Go

The Alcatel 1X definitely looks like a typical budget smartphone but it doesn’t always feel like one.

A subtle contrast to the usual plastic or metal or liquid glass backs found in other devices, Alcatel have opted for an unusual alternative: suede. Soft to the touch and almost felt-like at times, the Alcatel 1X lacks the flair and flourish found in even some of more-mid tier alternatives out there - but the creative choice of materials do serve to help it carve out it’s own unique identity.

Unfortunately, aside from physically feeling different from other budget smartphones, the Alcatel 1X failed to really win me over when it came to design. For all the talk that Alcatel are putting behind putting proper TCL displays in their smartphones nowadays, the Alcatel 1X just doesn’t look very good in action. Even on the highest settings, the screen comes across as dim and dull.

Worse still, this mediocrity undercuts the extra utility and screen space afforded to the Alcatel 1X as a result of its 18:9 aspect ratio’d display. Yes, this is one of the cheapest smartphone you’ll be able to find out there with such a display on it but it rarely feels like this feat actually delivers on the value that this inclusion should afford. It’s a value-add that feels compromised.

By a wide margin, the camera side of the equation is the area where the Alcatel 1X’s budget phone heritage manifests strongest. Again, as far as ticked boxes, go there’s an impressive amount here for the $129 asking price . However, all the same, the real-world experience of using this camera left a lot to be desired.

Alcatel do include a fair-few bells and whistles within their camera-app - such as easy social sharing, instant collages and a photobooth mode. However, when it came to the actual quality of the photos, some of these features end up feeling like an bittersweet consolation prize.

Images are often over or under-exposed and taking an image in perfect light takes full 5-10 seconds - meaning it’s very easy to miss or lose the image you’re trying to capture - and in low-light particularly, the fidelity drops even further.

The Alcatel 1X’s camera requires a lot of patience to use and it rarely feels like that patience is rewarded.

The Alcatel 1X runs on Android Oreo: Go Edition - a slimmed down, alternative version of their Android mobile operating system that’s been designed from the ground up to run better on smartphone with lower-specs. Specifically, it’s been designed to run on devices with 1GB of RAM or less. Devices like the Alcatel 1X.

The idea here is to try and erode the perception that cheap Android devices are synonymous with a shoddy performance and a poor software experience. The rising tide lifts all boats and all that. Unfortunately, in my experience, the Alcatel 1X ultimately served to invoke the exact opposite effect.

Yes, this is a $129 smartphone. I’m not expecting Google Pixel or Galaxy Note levels of responsiveness or extensive multi-tasking capabilities here. However, most apps running on the Alcatel 1X came across as excessively sluggish and embittering to use.

Crashes were frequent and freezes more-so. Hell, I couldn’t even run this device through GeekBench’s Computing benchmark because it reliably crashed before completion every single time. And if you’re thinking about playing games on this thing, forget it.

That said, when it came to benchmark scores, the Alcatel 1X did manage to cleanly outpace its natural rival: the new Nokia 1, which I reviewed in parallel.

In terms of everyday battery-life, we’d make it through the usual 9-5 work day most of the time but we did occasionally need a top up towards the end. We’re talking seven or eight hours of use here - significantly less if you watch a lot of video content.

The Alcatel 1X supports neither fast nor wireless charging.

I still really like the gutsiness of trying to provide a modern Android experience for as low as a price as the Alcatel 1X touts. However, for what it’s worth, it feels like there are just too many compromises here to make up for the money you’re saving. Every corner of the experience feels cut short and the sum total of what you’re left with just doesn’t add up.

If you’re looking for a throwaway device with all the functionality that modern Android offers, this’ll tick that box - but it won’t look pretty.