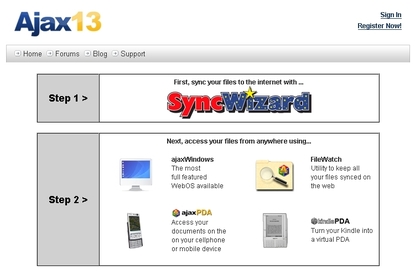 It's free, available anywhere and it's quick in use, but Ajax13's ajaxWrite leaves a lot to be desired.

The Ajax13 suite includes ajaxWrite (a word processor), ajaxXLS (a spreadsheet viewer), ajaxSketch (a graphics editor), ajaxPresents (slideshow presentation software), and ajaxTunes (a media player). For Ajax13, however, 13 is an unlucky number.

True to its Web-site claim, ajaxWrite loaded in under 6 seconds (it was closer to 3 seconds the few times it worked, though sometimes it never would open), and it has a clean, if sparse, look. That and its price are about all it has going for it.

The company's Web site says that "ajaxWrite has been designed to look like Microsoft Word, making it easy for anyone to start using it without needing to learn a new program." What it should really say is that ajaxWrite is more like WordPad than Word -- a toolbar and some menus are the only similarities in design. You can align text, choose from a selection of serif and sans-serif fonts, pick text colours and sizes, and create numbered and bulleted lists. There's a built-in, always-on spell checker that offers correct spellings and the ability to add words to the dictionary.

Then you run out of word-processing power. AjaxWrite offers no support for columns, bookmarks and tables (we found that we could add a bordered text area, but not a true table) or even the simple ability to use a "paste special" function -- that is, paste text but not the text's formatting.

AjaxWrite's user interface stands apart (and not in a good way) from every other word processor you've seen. Somewhat disconcerting, for example, is how a new document appears only as a small white page area bounded by a thin black border, which expands as you type, instead of a traditional full-screen work area. Though it sports menus, they don't work with the familiar Alt + letter key shortcuts. Worse, there's no help system; you're directed to the Ajax forums, which is a poor substitute for finding out basic information.

Ajax13 requires Firefox 1.5 or higher. The word processor supports Word, Open Office, RTF, text and PDF output formats, but it kept crashing with Java input/output errors when we tried to save our files. In our initial round of testing, we were unable to open or save our work as a Word or Excel file, despite trying the programs on several systems and with Firefox 1.5 and 2.0. Whenever we tried to open a file on our hard drive, we simply received "Please Wait" messages, but our files never opened.

After reading the Ajax13 forums, it appears our difficulties were due to problems with the company's servers, which lasted for a full week of testing. Testing after the holidays proved more successful -- file loading was still extremely slow, but at least simple files loaded.

Unlike the other applications in the roundup, Ajax13 can't save files to an online server, thus negating one of the attractive benefits of online suites -- anywhere, anytime document editing. It also means that you can't easily share your files, as with the other products. Worse, ajaxXLS, the spreadsheet module, is merely a viewer. You can't create a spreadsheet from scratch or modify an existing file. Given that Microsoft already provides a free Excel viewer, we just don't see the point of ajaxXLS.

There's so little of value in Ajax13 that we can only say it simply isn't worth the bother.