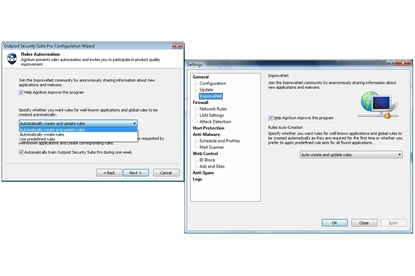 Agnitum Outpost Pro Security Suite 2008 remains in essence a top-notch firewall with some security features bolted on — some good, some not so good. Price-wise, it's not a compelling proposition. For the moment, Norton 360 remains the security suite of choice for the non-techie user.

The most obvious change is the user interface. No longer is there a distinction between Internet and "plug-ins" — this list is replaced by the security modules available. You expand each item in Agnitum Outpost Pro Security Suite 2008's left pane and status details are revealed on the right.

The firewall remains as good as ever, on a par with Zone Alarm. Similarly, Outpost Pro Security Suite's combined antivirus (based on the VirusBuster engine) and antispyware module returns good scores and has won recent certification from the likes of VB100 and ICSA Labs. So no complaints there.

The suite isn't as "smart" as its rivals and can swamp you with pop-up alerts. Although it has a "learn" mode for its firewall and antispam, it still requires a relatively high degree of user intervention compared to the likes of Norton 360, which takes intelligent decisions on fairly arcane matters on behalf of the user.

You can tell the Agnitum Outpost Pro Security Suite 2008 firewall to learn your behaviour over a week and automatically create rules, but this rather dangerously presumes your PC isn't already infected with, say, a Trojan.

You can also get it to scan files really quickly, but to do this it uses the same tricks employed by rootkits and so can trigger a false alert. SmartScan is turned off by default.

Unlike its main rivals, Agnitum Outpost Pro Security Suite 2008 lacks true parental controls and full network security protection. Without doubt, its weakest element is the spam filter. Like many others, it's based on a Bayesian filter that learns to identify spam, but this involves you manually marking spam emails.

You can make the program analyse a collection of spam emails, which is what we did, but then it treated an email we sent ourselves as spam. Even when we specifically marked it as not spam, another self-addressed email we sent ended up in the spam folder. It works only with Microsoft mail clients, too.

A turn-off is the way Agnitum Outpost Pro Security Suite 2008 presents its status results — at times it resembles a spreadsheet of numbers. This may suit some techies, but the average domestic user's eyes will simply glaze over when confronted with things like this.