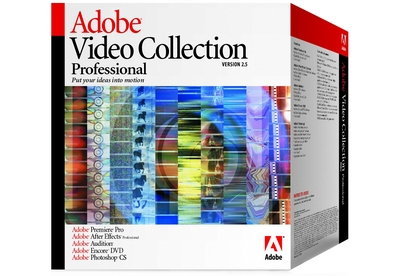 A tightly integrated set of tools that's extremely hard to beat if you're looking for a comprehensive post-production solution.

Video Collection 2.5 is Adobe's latest set of post-production tools for video and audio. The Standard edition includes Premiere Pro 1.5, Audition 1.5, Encore DVD 1.5, and After Effects 6.5 Standard. The Pro­fessional collection features After Effects 6.5 Professional and a copy of Photoshop CS.

Although pricey, these suites contain tools for about every post-production task you can think of, from editing, sequencing and compositing, right through to DVD authoring and soundtrack creation. However, although there's a lot that's new here, you'll still find a couple of bald spots in their feature sets.

When you run Premiere Pro 1.5 for the first time, you'll find that support for Panasonic's 24P camcorders is now in the project presets list, though High Definition Video (HDV) still requires a separate plug-in. This new version adds Bezier curve tools for keyframes and the ability to save custom effects parameters (After Effects now has the latter feature, too), plus it now includes a set of automatic colour correction tools - borrowed from Photoshop. In return, Photoshop has gained a collection of templates that match the aspect ratio and resolution of your current Premiere Pro project.

In the same vein, After Effects plug-ins that you've installed now appear within Premiere Pro, and you can copy projects and assets from one application and paste them into the other - though certain restraints on content apply. Premiere Pro 1.5 also maintains the resolution of imported stills, allowing easier pan and zoom shots with high-resolution images. You'll also find it contains a collection of GPU-accelerated effects in Premiere Pro's line-up. These use your OpenGL-compliant graphics card to preview certain effects (like page curls) without the need for rendering. This is a step in the right direction, though it's nowhere near the standard already set by Pinnacle's Liquid Edition.

While Encore DVD 1.5 may still lack features that are common to consumer DVD authoring tools (like slideshow creation or wizard-based DVD creation), professional authors will appreciate the tight integration with Photoshop for menu creation, allowing them to view changes made to a menu within Encore DVD immediately after it's edited in Photoshop. Chapter point handling has also been improved, with markers in Premiere Pro/After Effects projects now honoured in Encore DVD timelines.

After Effects 6.5 users will appreciate the new cloning tools and slick text animation presets found in the new version, with the Professional version also adding script automation controls, motion tracking enhancements and advanced colour processing/effects tools. You can also preview your work with a FireWire-connected device.

Finally, Audition 1.5 (for audio recording/editing) now includes industry-standard VST plug-in support, pitch/length correction, and the ability to view video frames in the timeline (handy for synchronising soundtracks). Audition also supports ReWire syncing, bringing it in line with audio tools like Cubase SX, and has integrated CD burning to create masters of your work.

With the exception of After Effects and Photoshop, the individual applications in Adobe's Video Collection aren't typically considered to be the leaders in their respective fields. However, with this level of feature sharing and component integration, the sum is most definitely greater than its parts. Video enthusiasts will probably find all their needs catered to by the Standard version, while the Professional collection provides a complete set of tools for the small- to medium-size video studio.