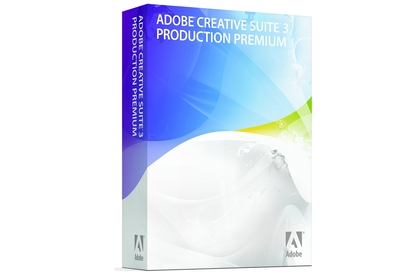 At over $3000, this looks expensive, but actually represents incredible value despite a couple of rough edges. Even if you don't necessarily need Flash CS3, you're getting a huge amount for your money, and the integration between such powerful standalone applications can't be matched.

As with the release of Adobe's Creative Suite 3 earlier this year, there's a considerable amount to uncover in the new Production Premium package. On face value, it could appear that more effort has been put into bundling third-party products like Ultra and DV Rack HD, but closer inspection reveals a series of tweaks that will seriously improve the video professional's workflow.

The suite itself has undergone significant changes, and is the first version available for both PC and Intel-based Macs. While core applications like Premiere Pro, After Effects, Encore, Photoshop and Illustrator are still present, Audition has been canned in favour of the new Soundbooth, and the bundle now includes new additions from Adobe's aggressive market acquisitions like Macromedia's Flash CS3 and Serious Magic's Ultra.

Premiere Pro's interface remains the same as before, but you can now open up multiple project windows and search their contents -- a minor change that really helps during complex projects. The export menu now includes Export to Clip Notes (previously under the Sequence menu) and Export to DVD has been replaced with the more powerful Export to Encore, which makes sense, given that Encore and Premiere Pro are bundled together as a standalone package. This allows you to take marker points on the timeline and use them as chapter points in your authored disc.

The Media Encoder section now includes MPEG-2 and H.264 support for Blu-ray compatible discs, and we were pleased to note that FLV encoding from the timeline has eliminated the pre-render step, making exports much faster. However, HD-DVD is not supported yet, nor the AVCHD format used by many new high-definition consumer camcorders. What's incredibly frustrating is that there's still no batch export function -- a serious oversight in any suite so clearly aimed at the Web video professional. (Importing your Premiere Pro project into After Effects is a clumsy workaround.) We're also scratching our heads as to why you still can't export JPEG images from the timeline, either.

No new effects or filters have been added, but the rate stretch tool has been massively overhauled, allowing you to add keyframe-based slow- and fast-motion points to clips on the timeline. While this isn't new to other editing applications, the Adobe implementation is one of the more intuitive incarnations we've seen.

Adobe's industry-standard compositor has inherited the vector graphics component from Illustrator, introducing the Shape Layer function to its feature set. This allows you to add and animate vector layers by drawing primitives just as you would within Illustrator, losing no resolution as they are enlarged and moved. 20 preset shapes effects are included, along with 40 preset animations that you can tweak to suit your needs using Illustrator's path operators like Pucker and Bloat, Zig Zag and Twist.

Perhaps the most exciting new addition is the Puppet tool, which allows you to quickly animate objects or figures simply by adding 'pins' at points where you want the object to bend and flex. A 3D mesh is then created from the object's components (employing Illustrator's Auto-Trace function). Creating your animation is as simple as holding [Ctrl] and dragging points around -- any movements are captured as keyframes that you can adjust or delete afterwards.

After Effects also takes Photoshop's improved Vanishing Point tool several steps further, turning a flat image into a 3D object that can be manipulated; casting shadows and receiving lights just like any other 3D layer. It has its limits, but can be used quite effectively to make quick 3D models of buildings and simple objects using Photoshop layers.

Although the number of preset backgrounds hasn't changed, the new Brainstorm feature allows you to quickly randomise their settings, which will make them more useful to any editor who wants a quick motion background.

After Effects also has per-character 3D controls for text, and shares Premiere Pro's Clip Notes tool, which is a highly effective tool for collaboration and client sign-off.