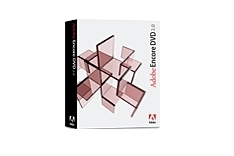 If you've got the right machine for the job Encore DVD 2.0 is one of the best options around for DVD authoring.

Creating a DVD is not that hard these days. Creating a DVD that looks professional and works flawlessly - now that's a different matter. Adobe Encore DVD 2.0 is an easy to use DVD authoring program which integrates perfectly with the rest of the Adobe Production Studio suite. When it comes to most Adobe software, many people are baulked by the interface which looks overly complicated and hard to understand. After half an hour with Encore we worked out how to create a basic DVD that was both functional and attractive. After a few more days and a little reading we were blown away at how good our projects were looking.

When you first open Encore the interface is a little overwhelming. It seems rather difficult but in actual fact it isn't too hard to work out. On the left of the screen is your source bin where you keep all you original clips, menus and buttons. These are then dropped into the flowchart window. In the flowchart window you create links between the buttons in your menu and the destination they the send the user when clicked. This destination can be another menu or a video or audio item. Video and audio have to be dropped into the timeline in order to become available in the flowchart.

Once you have placed all your menus and set the destination of the buttons, the last thing you need to do is make sure the navigation works. Thankfully, Encore has a preview function which gives you a complete version of the DVD that you can check before burning your project and fix any bugs.

We found the interface quite powerful and were thrilled to see the level of integration with Photoshop. Each menu or button can be edited with Photoshop and changes will be applied within Encore. When doing menu buttons we found the auto-trace feature quite useful. Essentially, it automatically creates a block shape of the button you have selected which is shown when the user has that button selected. The only problem with this feature is that using this method isn't very attractive, so if you have the time, you should always make separate buttons for active and inactive menu options.

Encore can also use motion backgrounds for the menus with limits on clip length. This is just like a professional DVD you would buy at a store and looks extremely sophisticated if done well. Essentially, through integration with After Effects 7.0, Premiere 2.0 and Photoshop CS2 you can create motion menus that look expertly crafted. Obviously this requires quite a bit of pre-knowledge of those software packages and unlike Encore, they aren't as easy to learn.

We found Encore DVD 2.0 a pleasure to use but it was not without its faults. The fact that it can only be used with Windows XP discounts both Mac users and users of earlier versions of Windows from using it. We received this program as part of the Adobe Production Studio package and were surprised to discover that it wouldn't install on anything less than a 64 bit AMD processor or a Pentium 4. This also limits its appeal. Lastly, while the program supports quite a few video formats and can automatically transcode them when making the final project for burning, Encore 2.0 does not support Quicktime which is a real shame.

If you want a program to create professional looking DVD projects quickly and easily, you can't go past Encore 2.0.