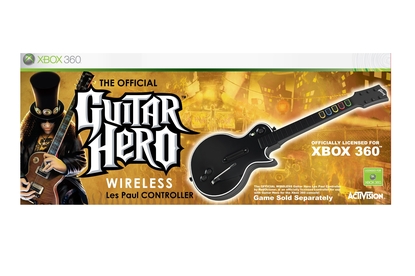 If you're tired of getting tangled in your old guitar's cable or want a second controller to battle your friends, this stand-alone purchase is well worth shelling out for.

To coincide with the release of Guitar Hero 3: Legends of Rock, Activision has released a stand-alone wireless peripheral for the Xbox 360. Based on the iconic design of the Gibson Les Paul, the controller can be used with all Guitar Hero games released for that console, as well as Electronic Art's competing Rock Band franchise (due to hit stores in 2008). This product is therefore aimed at people who wish to upgrade from their previous GH controllers, as well as those who want a second guitar for two-player jamming sessions.

For those who have somehow managed to bypass the hype machine, Guitar Hero is a rhythm-based party game that lets you live out the rock god fantasies that dwell inside every one of us. Ever since the original game made its stage-diving debut in 2006, the franchise has become something of a cultural phenomenon. In much the same way that rock n' roll revolutionised the music industry, it has irrevocably changed the landscape of video games; making Activision the world's number one publisher in the process.

Naturally, the aim of these wildly popular titles is to 'strum' along to legendary rock hits, via colour-coordinated prompts on screen (in place of strings, the guitar has five primary coloured buttons running down its neck). As the coloured 'notes' scroll along the fret board, the player must hold down the corresponding button on the guitar. Long notes need to be held down for their entire duration, during which time the whammy bar can be used for added effect. As notes are played correctly, the player score increases and the adoration from the crowd becomes louder. Get the notes wrong however, and the crowd turns on you until eventually you fail the song.

Like any great video game, the concept is easy to pick up yet quite difficult to master; with the five fret control board taking some seriously dexterous finger work to master. While it could easily be dismissed as a glorified bout of air-guitar, the series has proved to be one of the most entertaining and gloriously self-indulgent experiences in video game history. You really need to strap the guitar on yourself to appreciate how addictive the whole thing is!

In terms of its button layout, this latest addition is basically identical to the Gibson Xplorer which shipped with Guitar Hero II (a necessity to make it compatible with other games in the series.) The only new thing it offers is wireless functionality -- an improvement which cannot be overestimated. Indeed, one of the great joys of playing Guitar Hero is the compulsion to pull off stage acrobatics in your lounge room. While not strictly necessary (the game can be played while sitting down), it's basically a necessity to get maximum enjoyment out of the game. Thanks to the lack of cables, it is now possible to perfect those power slides and scissor-kicks without getting your legs tangled up and crashing geekily to the floor. (We speak from rueful experience.)

There are also a few downsides, however. Firstly, we found the controller's wireless sensor to be less accurate than we would have liked. For example, the game would occasionally kick into 'Star Power' mode (achieved by tilting the controller upwards) when we weren't expecting it, causing us to lose precious points. Plus, if you already own a couple of old Guitar Hero peripherals, there's little reason to shell out for a third one -- especially if you're not too fussed about jumping around like a lunatic. On a personal note, we're also a bit unimpressed by the guitar's diminutive 1/3 scale -- as axemen who like to play from the crotch, we find the unit's miniature size to be a tad emasculating.