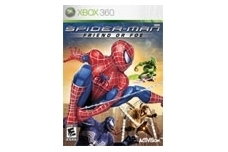 Spider-Man: Friend or Foe is a very simple game aimed at the younger audience with low difficulty and repetitive action. For older gamers and those who expect a little more from their games than a shallow beat 'em up experience might want to look elsewhere for their superhero action.

Making the most out of the old adage that your enemy's enemy is your friend, Spider-Man: Friend or Foe (FoF from now on) lets you take control of numerous heroes and villains from the Spider-Man 'verse and go on a beat 'em up adventure that brings to mind titles like Marvel: Ultimate Alliance and X-Men Legends.

Playing as Spidey, you eventually gain the help of cretins like Venom, Green Goblin and Doctor Octopus along with some heroes like Silver Sable and Prowler. The plot is a little thin -- chunks of a meteor hit Earth, someone's using them to create evil creatures, you have to stop them -- but the game keeps things moving fast enough that you don't really notice.

The game also ditches the expansive cityscape of the recently released Spider-Man 3 in favour of smaller room-sized areas; as such, the missions are repetitive to a fault: you enter a room, enemies appear, you beat them all up and move on. There are some interesting RPG-lite elements that let you power your characters up but the gameplay feels pretty shallow all around. Thankfully, a friend can jump in and help you out, which is probably the best way to play this game.

I am giving FoF the benefit of the doubt because it's obvious that it's geared towards a younger audience: the difficulty is low, the action is mind-numbingly simplistic and the overall vibe of the game, from the art style to the character dialogue, is juvenile -- as in youthful, not immature. It's sure to be a hit with its intended demographic and that definitely counts for something, which is why I am awarding the game a good score. However, older gamers and those who expect a little more from their games than a shallow beat 'em up experience might want to look elsewhere for their superhero action.