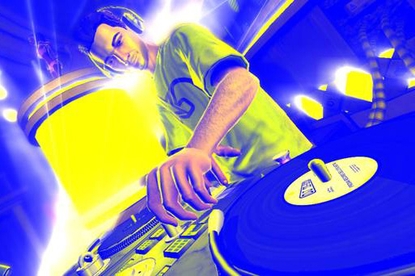 It was inevitable that Activision would look to expand its rhythm genre empire and DJ Hero is a noteworthy addition to its arsenal. However, it isn't nearly as accessible nor as polished as its current bread and butter franchise, Guitar Hero. Still, it has potential and the music is good enough that it should convince enough gamers to step up to the ones and twos; we're also certain it will warrant a sequel, which we hope will fix some of the issues that bog down an otherwise noteworthy debut.

Guitar Hero isn't just a successful game franchise: it's a bona fide phenomenon. But as the old saying goes, all good things must come to an end and it's obvious that we've reached a saturation point for rhythm games. Sequels are becoming nothing more than glorified track packs and while sales are still strong, gamers are like cats in that they become easily distracted, so publishers have to find new ways to keep them interested. In that respect, you can either specialise, the way Rock Band did with The Beatles, or you can produce an offshoot, which is the route Activision took with DJ Hero.

It's a title that benefits greatly from the familiarity that we have with its siblings: Guitar Hero did such a great job of indoctrinating us to the joys of pushing buttons to a beat that half the battle's already been won. But I don't think DJ Hero will reach the same level of success that the Guitar Hero franchise did for a couple of reasons. The first is the price tag: at $179, it's a rather large investment for yet another specialised piece of plastic. Experiencing it first-hand will make believers out of some but it probably won't turn an entire generation of gamers into converts the way Guitar Hero did, especially because the experience isn't as inherently satisfying; after all, everyone wants to secretly be in a band but far fewer of us long to be a professional DJ.

Secondly, the hardware isn't nearly as accessible or as polished as the now classic five-buttoned guitar. The turntable peripheral is solidly built but it's one or two revisions away from being perfect. The cross-fader switch is way too fickle for its own good; sometimes being even a little out of position will result in a miss, which wrecks havoc on your combos. The turntable itself works fine but having to press a button while also making a scratching motion is more work than it should be; the blue button, which sits closest to the "record's" centre, is especially difficult because you can't get as much leverage with just your ring finger. The actual note charts could also use a bit of polishing as well; it can get a bit too "busy" for its own good, especially on the harder difficulties.

You'll mess up a lot if you play on Hard or Extreme and that's a shame because missing a note cuts the music off and that's the one thing they absolutely nailed. The 93 included songs are so good that I'd sometimes stay on the menu screen and just nod along to the beat. The audio team really put a lot of thought into the mixes and the pairings not only make sense but they're often clever as well. Eminem's "My Name Is" perfectly balances with Beck's "Loser" to form a track that not only playfully thumbs its nose at the artists involved but also gives them a pat on the back. And the fact that they took two songs that have become pop-culture punchlines -- Vanilla Ice's "Ice, Ice Baby" and MC Hammer's "Can't Touch This" -- and mashed them together into something worthwhile is downright inspiring.

The music really does most of the heavy lifting here and I'd gladly purchase the soundtrack if one was made available but the game's lack of polish left me a little flat. DJ Hero has its moments but I didn't feel that immediate sense of magic that I did the first time I strapped on a replica guitar. I do think DJ Hero will carve out its own niche but for the reasons listed above its fanbase probably won't be as sizable or as rabid as its rock & roll cousins. There is hope, however, that the inevitable sequel will solve the issues with the hardware and note charts, the way GH2 finished what GH1 started, and that version might be the one to wait for but at the least, gamers who invest in DJ Hero can soothe any angst they feel over its faults by listening to the incredible setlist.