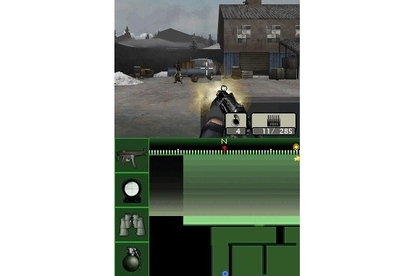 In all, Call of Duty 4 for the DS provides some decent -- if watered down - first-person shooting action.

Released alongside the console and PC versions, Call of Duty 4 for the DS does its best to provide a similar FPS experience in the palm of your hand.

While the controls handle decently, the game just doesn't hold up graphically and, overall, provides entertaining but marginalised gameplay.

You play as a soldier in either the British or American armies, and while many of the levels, characters, and scenarios are similar to the console releases, none are exactly the same, so Call of Duty 4 DS technically sports a unique storyline. The levels are designed well, with a variety of objectives and vehicle sequences that help keep things from getting too stale. The controls are another bright point; while they don't reach the lofty standard set by Metroid Prime: Hunters, they are generally responsive and the stylus affords a better level of control than what you'll find in a PSP FPS.

Graphically the game suffers from very basic models and textures, which unfortunately hamper the sense of immersion. That being said, the tradeoff is that the game maintains a decent frame rate throughout. The animation for enemies and allies alike is both stiff and unbelievable: shooting someone elicits a reaction you would expect from someone who had just been rudely bumped into.

In all, Call of Duty 4 for the DS provides some decent -- if watered down - first-person shooting action. It doesn't live up to the standard set by Metroid Prime: Hunters or does a terribly good job of replicating the efforts of its console and PC big brothers, but it's a decently entertaining game for any DS owner who needs a FPS fix.