Acer's 14in TravelMate P645 is a business Ultrabook that's strong, attractive, and full of useful features 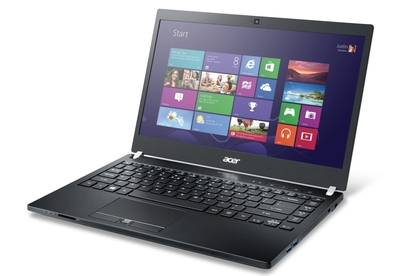 Acer's TravelMate P645 is among the company's best laptops. It's a 14in Ultrabook with good style, a solid build, long battery life, and plenty of features. It could use more storage capacity, and its touchpad driver is quirky, but overall it's a useful and affordable laptop (depending on the configuration you choose).

The Acer TravelMate P645 may be a 14in Ultrabook, but you could be forgiven for thinking that it’s a 13.3in model at first glance. It has a slight build that ensures it’s not bulky or heavy, and it features clean lines and a thin screen bezel, which give it an understated styling. You can get it in a few different configurations, but the one we are looking at here is one of the entry-level models.

The TravelMate P645 (specifically, the TMP645-M-5420G12Tkk that we are looking at for this review) doesn’t have the most sought after of configurations, which is understandable, but it’s still capable of running most typical office applications and Web-based tasks with ease. It comes with a fourth generation Intel Core i5-4200U CPU, 4GB of DDR3 SDRAM, and a 120GB solid state drive.

In our Blender 3D rendering test, the TravelMate P645 put up a time of 50sec, which is good for an ultraportable, while in HandBrake it took 22min to turn a DVD (vob) file into an MP4, showing that it can also be used for some tougher media tasks. Graphics performance was par for the course in 3DMark’s Cloud Gate test, recording a score of 4117, meaning it’s a suitable laptop for business graphics (presentations) and for running simple games such as those that can be found in the Windows Store.

For storage, the 120GB Intel solid state drive is adequate. It put up a read rate of 446.5 megabytes per second (MBps) in CrystalDiskMark, but a write rate of only 148.5MBps. We would have liked something with a faster write rate. Its capacity is a bit of an issue, though. You only get a formatted, usable capacity of 83GB, and of this only 45GB is left free after taking into account the operating system and pre-installed applications. There is a hidden recovery partition, which is why you only get 83GB to use, and this recovery partition has both Windows 7 and Windows 8 on it.

Our laptop came to us with Windows 7 running, but it was very easy to change to Windows 8 by running the built-in recovery manager software. The whole process took less than 20min. We think the TravelMate P645 runs better under Windows 8, with one of reasons being that the touchpad supports slightly different gestures that we think make it more comfortable to use, but we can understand that many of you still might not want to use the more modern system for business.

All of this gear is housed in a body that feels incredibly solid. The base and palm rest are made from a magnesium-aluminium combination, and there is barely any give in these areas at all when you try to bend them. An access panel is present at the bottom so that memory and storage can be accessed, but the battery is located on the inside of the unit. Metal hinges hold the screen in place, and they are designed in a way so that you can lift the lid with one hand while the base is resting firmly on a flat surface.

The lid is made from uni-directional carbon fibre, which is said to have twice as many fibres than woven carbon fibre in its signature. Acer told us it has been using carbon fibre in its TravelMate models since 2006, with the release of the TravelMate 8200, mainly to keep the weight down while increasing strength. When the notebook is closed, the lid feels as almost as rigid as the base and the whole unit feels like one solid block. While it's open, there is still plenty of flex in the lid when you hold it from the sides and put pressure on the middle.

The screen has a resolution of 1366x768, which is on the low side if you’re used to lining up windows side by side while multitasking, so you’ll have to spring for a more expensive model with a Full HD, IPS panel if you want more pixels — and also better viewing angles. You also get a dedicated AMD Radeon HD 8750M graphics adapter when you choose to go for a Full HD screen. Despite the low resolution of the screen in our review model, it’s a fairly good one. Once you get the tilt angle just right, the image looks vibrant, and it’s also very bright. It’s not a glossy panel either, so reflections won’t be a problem.

At 1.5kg, the TravelMate P645 isn’t a heavy unit, especially when you consider the 14in screen size; it’s almost identical to the weight of the Lenovo ThinkPad T440s, 300g lighter than the HP ZBook 14, and only 100g more than the slender Lenovo ThinkPad X1 Carbon, even though the Carbon has a touchscreen. There are plenty of built-in features that will come handy during a typical work day, including three USB 3.0 ports, a full-sized SD card slot, VGA, Gigabit Ethernet, and HDMI. Furthermore, there are dedicated headphone and microphone ports instead of a combination headset port.

Wireless connectivity is facilitated by an 802.11n module (an Intel Dual Band Wireless-N 7260), and this produced quick file transfers up to 26MBps on our test network featuring a Netgear Nighthawk router. Bluetooth is also available, which can allow you to either connect external wireless input peripherals, or speakers such as the powerful Polk Woodbourne.