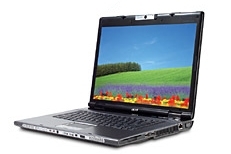 With a wide array of features and good performance the Travelmate 8200 is a high quality notebook with only a few minor problems.

The generously equipped Acer TravelMate 8200 packs a 120GB hard drive, a unique built-in Webcam and both Bluetooth and Wi-Fi. Its ExpressCard/34 slot accepts the small form factor 34mm, though not the larger 54mm next-generation plug-in card. A SmartCard reader provides an extra layer of security. For convenience, the 8200's five-in-one memory card reader, audio ports, FireWire port, and wireless communications buttons are all located on the front of the notebook. The 8200 also features a DVD-D connection for attaching a digital flat-panel monitor. This port doesn't come with the extra pins needed to make it compatible with an analog monitor adapter, but that's okay because the 8200 has a standard VGA-port for such use.

Built into the top-center of the display bezel, the 1.3-megapixel Acer OrbiCam swivels 225 degrees in the screen frame to capture images in front and in back, and it comes with great software. A cool tracking feature automatically zooms and recenters faces when they move out of camera range. Stills are a snap to take. There's even an avatar feature that lets you replace your face with an animated character if you feel like appearing on camera as someone (or something) else.

The Acer's ergonomic keyboard, with its 5-degree horizontal arc, is a bit of an acquired taste. The shorter-than-standard (2.5mm) keystroke limits tactile feedback; but the keyboard's layout is good, which always helps us get used to positioning our hands farther, and the user-programmable launch buttons are a nice extra.

Graphics artists and spreadsheet jockeys will appreciate the 15.4-inch wide-aspect screen. The high WSXGA+ resolution of 1680 by 1050 pixels is good for detail work but some users may need to increase the Windows font and icon sizes from their default to avoid eyestrain during everyday use. On the plus side, Acer's bundled GridVista software makes it easy to arrange applications on the screen using a grid.

Although not billed as a gaming notebook, the 8200 handled games well, thanks to its powerful ATI Mobility Radeon X1600 graphics card with 256MB of dedicated memory. Boosted by 2GB of main memory and a 2-GHz Core Duo T2500 CPU, the 8200 racked up a WorldBench 5 score of 100 - one of the best scores we've recorded for a notebook. Still, other 2-GHz Core Duo T2500-equpped notebooks such as Gateway's M685-E have earned scores almost as high while using only half as much memory.

Battery performance could have been better too. The 8200's 2.8-hour battery life is a bit short for a midsize 6.6-pound notebook, but you have the option of replacing the DVD burner in the modular bay with a second At 3.35kg, the 8200 is definitely quite a portable and powerful notebook.