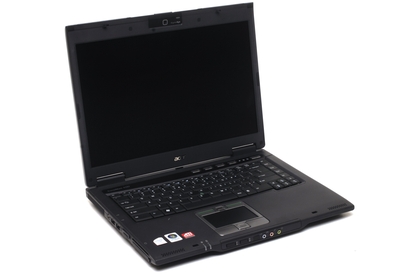 This business machine offers all that a business user on the road could ask for, and will happy replace a desktop PC at the office. The Centrino Pro and Santa Rosa features give it an advantage over older models and it performed well in our battery tests.

The formal introduction to Intel's Centrino Pro and the next generation Centrino platform, codenamed Santa Rosa, has come and gone. The Acer TravelMate 6592 business notebook is one of the first Centrino Pro review units to become available on the market so we eagerly got it into the test centre to put it through its paces.

The new Santa Rosa Centrino platform brings a few welcomed improvements to the notebook space, such as the faster Wi-Fi 802.11n, an 800MHz front side bus (FSB), a range of new processors based on the Core 2 Duo Merom CPU, optional Turbo Memory, and some new power saving features. As part of Centrino Pro Intel has also added its Active Management Technology (AMT), which is similar to the vPro technology already released in desktops. This technology allows IT administrators to access the Acer TravelMate remotely via a wired or wireless network connection for maintenance or support.

The increased bus speed offered by this platform allows more bandwidth for the CPU, chipset and memory to shuffle data to and fro, providing faster overall performance. Apart from that, however, the new Santa Rosa platform has a few tricks up its sleeve for performance and power saving. Among these is the new Enhanced Dynamic Acceleration, which allows the platform to power down one core of the CPU when no applications require it, and use that added power to boost the still-active core. This can save power, but it can also give a power boost to single threaded applications that are only using the one core.

We put the new platform and all its fancy features to the test with WorldBench 6, in which it scored a healthy total of 74. This is a very good score for a business notebook, but overall, the results don't show any specific areas of spectacular performance. In our MP3 encoding test, we did see a more impressive result. In this test we take 53 minutes worth of WAV files and convert them to 192Kbps MP3 files using Cdex, a freely available, single-threaded application. This test took the Acer TravelMate 6592 just 119 seconds, exactly the same time as the Dell XPS M1710 (7950) with its T7600 2.33GHz CPU, using the 667MHz FSB Centrino platform.

One area that really impressed us with this notebook was in its battery life. The new Santa Rosa Centrino platform offers a number of power saving features such as CPU and FSB performance scaling according need, but no distinct battery life advantages have been evident in our tests of the Asus F3Sv (pre-production model) or the Fujitsu Lifebook E8410. Regardless of the reasoning, the Acer TravelMate 6592 lasted for 134 minutes in our worst case scenario battery test. For this test we loop a DVD until the battery drains completely. It is considered a worst-case scenario as the speakers and optical drive are both in continuous use throughout the test, as well as the core components such as the CPU and RAM.

The graphics chip used in this TravelMate is the first we've seen form ATI's new range of mobile graphics processing units (GPU). Unlike the rest of the range this model only supports DirectX 9 and is considered an entry level card, but will be fine for most business purposes. As a gauge of its ability we ran 3DMark 2001 SE, in which it scored 7784. This shows it has a little bit of grunt for simple tasks, but don't expect it to run any 3D games or other heavy graphical tasks.

The 15.4in screen has reasonable brightness, but is a little dark by comparison to the majority of screens we see. Contrast levels are good though, and so is the viewing angle. It's also very sharp, with a 1680x1050 screen resolution. The keyboard has an ergonomic, curved layout, that is designed to match the natural curve of the wrists when typing. Included are a touchpad and an eraser-head track-point.

The TravelMate offers three USB ports for connectivity as well as a FireWire port. it also includes integrated Bluetooth. For an external monitor there are VGA and DVI ports and for TV-out there's an S-Video port. This allows the notebook to connect to any monitor or projector, which can be handy in the office or on the road giving presentations. There are also a parallel port and a serial port for older devices. For wired connectivity there's a 56Kbps modem and a gigabit Ethernet connection.

For storage, the TravelMate has a 160GB hard drive, which will be more than enough for the average business user, but it also has a DVD re-writer installed for additional storage needs. A 5-in-1 media card reader is installed for SD, MMC, MS, MS-Pro and xD media cards. It also includes a PC Card slot (type II). For additional security, the notebook has a fingerprint reader, providing the option for a more secure login procedure.

Please note that this notebook has a webcam in the supplied images, but the final product won't.