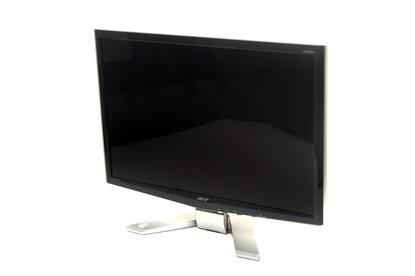 A solid 22in display from Acer, the P223W will suit users regardless of whether they want to play games, watch films or just browse the Web.

The 22in monitor category has been heating up in recent months and has rapidly become the sweet spot in terms of value for money if you're looking to up-size your PC display. Acer's new range of LCDs contains two 22in models, with the P223W being the higher-end unit. It is suited to a variety of tasks, from basic desktop computing through to gaming and movie watching.

As with most 22in displays it sports a 1680x1050 widescreen resolution. Other specifications of note include a 5ms response time, a brightness rating of 300cd/m2 and a contrast ratio of 2500:1.

In our imaging tests the P223W performed very nicely. First we ran DisplayMate Video Edition, which is a piece of software designed to test the panel at a fundamental level, and we were pleased with the results. The sharpness graphs were rendered clearly and there was minimal noise on the moire patterns. We did see a slight flickering towards the top of the display, but it was so faint it wasn't noticeable on anything except the chart tests themselves.

Colours were well rendered, although there was a slightly blue tinge to some shades. The only tests that revealed any issues at all were the contrast charts. Separation between segments at the extreme ends of some of the colour intensity ramps was a little lacking.

Fortunately, contrast was handled better in our game and film tests. There was still slightly less detail in dark areas than we would have liked, but it wasn't too problematic. Ghosting was minimal, which should be expected considering the low response time, and the sharpness and colour accuracy seen in previous tests were again evident here. Black levels were quite good, although not the best we've seen.

When running via a D-sub connection, desktop icons and text at times looked quite soft, however connecting via DVI eradicated this problem. Viewing angles were good, but there was a little colour shift when looking from a steep vertical angle.

Aesthetically. the P223W resembles many of the new breed of widescreen entertainment units hitting the market. It has an angular, gloss-black bezel and a slim design. The display can be angled backwards, but no side-to-side or forward motion is available.

It packs in both DVI and D-sub connections, but we'd definitely recommend using DVI if at all possible. There is an on-screen menu included, which gives some basic ability to adjust colour presets. It isn't as robust as some on-screen displays, but it allows you to adjust colour levels, brightness and contrast which should be adequate for most people.