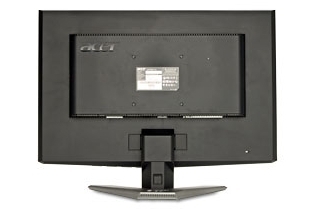 Though the P221W warrants praise for its solid text and graphics quality, its price disqualifies it from serious consideration for most users.

The Acer P221WB handled common text and graphics tasks reasonably well. But its price ($499) is almost twice as high as that of some competing monitors that perform just as well and offer extras to boot.

Though well suited for text-heavy office tasks, the P221WB supports enjoyable video viewing, too. Spreadsheets and Word documents looked sharp, and colours on a range of images -- from blueberries to people -- seemed natural, clear and bright. This made surfing Web pages a pleasure.

Like many basic monitors in the 22in widescreen class, the P221WB permits only one adjustment -- a rather narrow-angled tilt. The monitor sports a thin, sleek, glossy bezel with silver accents. A slight angle at the bottom of the monitor visually complements the boomerang shape of the silver stand.

Controls in the on-screen display (OSD) menu include a dedicated monitor preset button, which Acer calls eColor. Among the available presets are colour and brightness combinations for movies, graphics, and text. The OSD buttons labelled 'Auto' and 'Menu' can be confusing because both of them function as "Enter" or "Select" keys in different menu contexts.

Pirates of the Caribbean: The Curse of the Black Pearl displayed nicely on the monitor. Blues in the movie popped, particularly in sky and water scenes, and a high level of detail was visible in dark backgrounds. The reds seemed a little oversaturated, though. Common soldiers' uniforms, ordinarily a rich red, appeared a bit orange, but the blue uniforms of the higher-ranking officers were pleasingly balanced. Skin tones were natural looking for the most part, though the suntanned pirate played by Johnny Depp looked at times too bronzed, again suggesting a bit too much orange. The monitor handled fast motion and panning well, displaying virtually no ghosting in a scene of running soldiers.