Acer Aspire Z5771 review: An all-in-one PC with an Intel Core i7 CPU and a resistive touchscreen panel 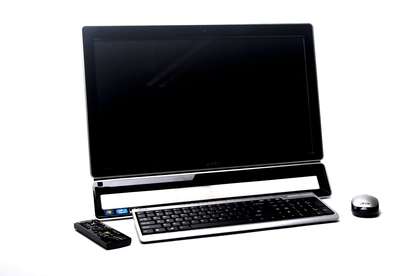 If you're looking for a touchscreen-capable all-in-one PC, the Aspire Z5771 is worth considering. It has a resistive screen that's mostly accurate and supports two inputs, but most importantly, it has a lot of grunt under the hood, including an Intel Core i7 CPU and 8GB of RAM, and it comes with USB 3.0 and HDMI input and output.

Acer's Aspire Z5771 all-in-one desktop PC is part of a vendor trend suggesting that users want these types of systems in their homes. Far from a conventional PC, the Z5771 features a resistive 23in, Full HD touchscreen in addition to regular keyboard and mouse peripherals. It serves up an Intel Core i7 CPU, lots of RAM, a discrete graphics adapter and a useful grouping of connectivity features, but it could use a faster hard drive.

The design of the Z5771 isn't all that attractive. It has a silver outline around its black, glossy bezel and its stand is thick and reminiscent of an upside-down handle. It's definitely not as attractive as the HP TouchSmart 610, for example. You can't do much more than plonk it on a desk and lean it back about 20 degrees. All of its components are housed within the case, and they are not easily accessible, which means that upgrades and repairs will require a fair bit of effort. All you need to do to set up the unit is plug in its beefy, external 180W power brick, which has been omitted from the case due to space constraints.

On the inside, the configuration of the Aspire Z5771 includes an Intel Core i7-2600s CPU, which runs at 2.8GHz, and has four cores plus Hyper-Threading. It's joined by 8GB of DDR3 SDRAM, an NVIDIA GeForce GT 520 graphics adapter, and a 1.5TB hard drive, which only spins at 5400rpm. Heat comes up through the top-rear of the screen and there is some noticeable whirring from the internal fans when the system is used in a quiet environment.

When we first booted the machine, it felt very sluggish; part of this was due to the pre-installed software that loads along with Windows 7. This includes McAfee Internet Security and Norton Online Backup, which also have the annoying habit of springing pop-up notices — you'll have to activate or uninstall them to get rid of these. During everyday operation, there were some times when applications sometimes stalled before opening and the overall feel of the system wasn't always swift, but for the most part we had no problems with the systems performance.

In our Blender 3D rendering and iTunes MP3 encoding tests, the Core i7 CPU showed that it has plenty of power: it recorded 21sec and 47sec in these tests, respectively, which are zippy results. In 3DMark06, a score of 5154 shows that this PC won't be great for gaming, but that it might be able to handle some low resolution, low-detail games — it's definitely not a machine that's designed for gaming though. What you can do with this machine is run productivity software, photo and video editing software and multitask till you can't multitask no more.

The hard drive in the machine is a 5400rpm, Western Digital Green (WDC 15EARX), with a capacity of 1.5TB. It's not as quick as a 7200rpm hard drive, especially when moving large amounts of files, and this was shown in CrystalDiskMark, where the drive recorded a read time of 86 megabytes per second (MBps) and a write time of 82MBps. For a desktop drive, we would have expected rates above 100MBps. In our own file transfer tests, the drive recorded 48MBps, which is slower than most Intel Core i7-based notebooks, for example. It will prove to be a slow for disk-intensive tasks, whether managing files, or editing large video files, as well as when launching some applications.

But the main selling point, apart from the all-in-one, space-saving design, is the touchscreen, which allows you to navigate the system and select files with your hands. It's a resistive screen, which means that it works with pressure rather than capacitance or optical positioning (most all-in-one touchscreens we have seen recently, especially from HP, use optical technology). This means you can use either your finger or a stylus to interact with the screen. We found the screen itself to lack smoothness — our fingers couldn't slide across the screen smoothly most of the time, and, at times, gripped the screen. This made for uncomfortable navigation. We had a lot more fun using a rounded pen to navigate the screen. The Core i7 CPU provides more than enough grunt for the touchscreen interface, and you can use two touch inputs simultaneously.

The touchscreen can be tiring to use for long periods of time, unless you keep the screen close and rest your elbows on the desk the whole time. We think the interface is best used to interact with the pre-installed Clear-Fi application, which is designed for touch input. You can either click on the Clear-Fi icon on the screen to initiate it, or pinch the screen. Either action will bring up the components of the software, which includes a media player for your videos and music. In the past, this application was a bit of a pain to use, but this version worked well. It even makes it easy to access content from other computers on your network — the computers' icons are shown if they are found on the network and all you have to do is just tap on the computer you want to use.

As for the quality of the screen, it's adequate for most tasks, but its glossy finish will cause reflections and plenty of annoyance if you use it in a bright environment. You can't lean the unit back too much either, and we think it could use a better stand that can tilt back further. We found the contrast and brightness levels to be fine for viewing photos and videos, but we wish there were physical controls for these settings like there would be on a regular monitor.

You can use the Aspire Z5771 as TV if you wish. It ships with an AverMedia A373 MiniCard Dual DVB-T, which is a dual digital TV tuner. It works in conjunction with Windows Media Centre and allows you to watch one channel as you record another. The supplied Media Centre remote control communicates with the PC via its built-in infrared receiver, and it allows you to switch channels and initiate recordings from afar, while lounging on a couch or lying in bed. It's a two-sided remote control: the main side has the Media Centre buttons, while the rear has a QWERTY keyboard in case you want to pump out a couple of tweets without getting up.

A lot of connectivity options can be found on the Z5771, including six USB ports, two of which are USB 3.0. You also get Gigabit Ethernet, HMDI in and out, optical audio output, stereo output, microphone input, and an SD card slot. You can use the HDMI out port to connect the PC to a big-screen TV, or you can use the HDMI in port to use the Z5771 as a monitor (but not a touchscreen monitor). You also get a webcam and integrated 802.11n Wi-Fi. However, the integrated Ralink Wi-Fi wasn't great; the signal was only two bars to our Linksys router from the same spot that other machines manage three or four bars, and it was noticeably slow during regular usage.

The keyboard and mouse that ship with the unit are cordless, which is good, but they aren't overly comfortable. The mouse, for some reason, doesn't have its sensor mounted in the centre of the base, as it is in other optical mice, and this makes it feel a little off as you move it around. They keyboard has soft keys, but it's a notebook-style keyboard with arrow keys and a number pad that are jammed in rather than given space. You'd be better off using your own peripherals. The speakers in the unit sound too flat and aren't great if you're serious about music-listening experience. You'll want to plug in a good pair of speakers to give you more enjoyment.

The Aspire Z5771 definitely isn't the best in the all-in-one touchscreen PC class, especially when it comes to looks and touchscreen technology, but it is a decent all-in-one machine with a fast processor and plenty of RAM. We wish it had a faster hard drive and that its design was a little more appealing.