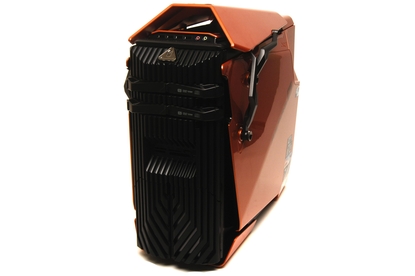 Acer has made a valid attempt at creating a monster of a PC in an Alienware-like vein, but ultimately, its attempt falls short because the high-end model doesn't include options for the latest in memory and graphics technology.

Acer has gone all-out audacious with the Predator PC, which is aimed at hardcore gamers and fans of all things orange. It has more moulded plastic than a Honda Civic at La Perouse on a Sunday night, and the plastic on the Predator's case, like the plastic on a Honda, is just for show.

But beneath the shell of the machine is a configuration which, depending on how much money you spend, should be able to run any game you throw on its hard drive, as well as swiftly edit any movie you capture with your DV camcorder.

The model we reviewed came with an Intel Core 2 Duo Q9450 quad-core CPU, 4GB of DDR2 RAM (it ran Windows Vista 64-bit), two 640GB hard drives (not in a RAID array) and a GeForce 9800GTX graphics adapter. As you can see, it's a potent beast, although there are even more impressive components available. There is an option for SLI graphics, an Extreme Edition CPU and a RAID array, but it'll cost you almost as much as a circa 2000-01 Honda Civic — or, $12,999!

However, whether you pull more chicks with the done-up Civic or the Predator will depend on the types of LAN parties you frequent, and if you do happen to take the Predator to a LAN party, you'll definitely turn heads and possibly get a few kisses blown your way from the sheilas. Mainly because they'll know you're loaded!

Don't be surprised if you don't quite get the positive reaction you're looking for when you rock up to a LAN party with the Predator in your stroller, because not everyone in our office liked it. In fact, some members of staff hated the Predator and made sure to let us know about it every time they walked past; but strangely enough, after using the machine for a few days, you come to appreciate its lines and angles, as well as the effort that's been put in to creating this beast. But not its front panel door. We hate that.

Of course, a front panel door is something we can never get used to on any system, because they are just so inconvenient. And the door on the Predator isn't even motorised, so there's no 'wow' factor to it. However, it does fall nicely under its own weight when you close it. It covers up the optical drive bays and the memory card reader, as well as the hard drive bay door.

The hard drive bay door opens up to expose four 3.5in bays, making it very easy to install a new hard drive or remove an old one. Drives can also be swapped while the machine is running, but just make sure you don't remove the operating system drive, which is clearly marked. With storage so cheap these days, many of us have old SATA hard drives lying around that we need to access from time to time. The design of this bay makes it easy to do this, with no need to remove the side panel.

If you do remove the side panel, though, you'll notice a clean and well-put-together environment, and so you should considering the effort that's been put into making the outside of the case. A shroud covers the liquid CPU cooler. It's the neatest liquid cooler we've seen in a pre-built machine. Its short pipes are attached to a CPU-mounted pump and a radiator, which sits in the space usually reserved for a rear case fan; there is a fan attached to the radiator to blow cool air through its fins. Heat pipes and heat sinks cool the chipsets and MOSFETS on the motherboard, while the graphics card is left with the standard factory-installed NVIDIA cooler design. The system didn't make a lot of noise while it was idle, nor when it was running games for that matter.

The machine's performance in our tests wasn't spectacular, but it proved that it can perform taxing tasks. In the Blender 3D test, the machine's four cores worked together to render a 3-D job in only 35sec. If iTunes could use four cores, the Predator would have achieved a much better time than the 1min that it took to encode 53min worth of WAV files to 192Kbps MP3s. The result means the Predator will do a good job of encoding music and rendering and editing video files; it actually comes with software called Acer Arcade Centre, which is Media Center-like in its appearance and has facilities for capturing and burning movies recorded by a DV camcorder.

For watching movies, you get an optical drive that can read HD-DVD and Blu-ray discs, as well as DVDs. It ran both types of high-definition discs without any problems, so you won't have to worry about HDCP support.

If you use this machine for running office applications, you won't have any problems at all with its speed (it scored 103 in WorldBench) and it will especially excel when you multitask. It ships with a glossy, high-definition 24in LCD screen, which has great contrast, but which also suffers slightly from reflections when viewed in a light-filled room. You also get Logitech input peripherals, which don't exactly match the rest of the Predator. The included G15 keyboard and G5 mouse are a little tacky. While the G15 keyboard has many good points (programmable buttons and illuminated keys, which are great for gaming), it can be uncomfortable to type with. However, the G5 mouse is one of our favourites, and it can be weighed down if you feel it's too light, and its sensitivity can be adjusted on-the-fly.

Connectivity is standard at the front and rear of the Predator, but we love the location of the four USB ports on the roof of the machine. We do wish that this model had a sound card installed, as the on-board Realtek chip doesn't really cut it for gaming nor for recording music. Of course, you can buy a model with a dedicated sound card included, so it's not a major sticking point.

At the end of the day, you won't be keen on the Predator unless you've got some cash to burn and really want something that's going to turn heads and make your friends envious. It is quite well designed, and it also performs well. Of course, the more powerful the configuration you choose, the more you'll have to pay. Unfortunately, there is no option for an Intel-based motherboard with DDR3 memory support, nor support for graphics cards better than the GeForce 9800 GTX.

Note: the Logitech G15 keyboard is only available for the first 50 buyers.