Excellent battery life, a light weight and a slim profile make the Acer Aspire One Happy perfect for travellers who want something small and easy to cart with them on their journeys. The performance of the Aspire One Happy is also above the norm for a netbook, thanks to its dual-core CPU. However, it does get warm when used on your lap and its implementation of Android is not useful.

The Acer Aspire One Happy is an interesting 10in netbook: it runs the Android operating system in addition to Windows 7 Starter in a dual-boot configuration. It's a brightly coloured netbook (we reviewed the unmanly Lavender Purple version) and also quite thin and light. The features around its edges are standard for a netbook, and its graphics, memory and storage specifications are nothing beyond what we've come to expect out of a low-cost ultraportable. However, it does feature a dual-core Intel Atom CPU, which gives it much better performance than previous-generation netbooks.

Aspire One Happy: Specifications and performance

The Aspire One Happy runs an Intel Atom N550 CPU. Unlike the 1.6GHz, Atom N450 CPUs we have become used to seeing in netbooks, this is a dual-core processor with a frequency of 1.5GHz and Hyper-Threading. It can process up to four software threads at once, and it also supports DDR3 SRAM instead of DDR2 SDRAM. Like most netbooks, only 1GB of RAM is installed and integrated Intel GMA 3150 graphics are used. Storage is a 250GB, 5400rpm hard drive (a Hitachi HTS545025B9A300).

In our performance tests, the Aspire One Happy gave glimpses of speed that are uncommon for a netbook, especially when it came to running multithreaded applications; its straight-line speed was also a little faster than we're used to seeing from a netbook. In our iTunes MP3 encoding test, the dual core CPU's 1.5GHz speed managed to finish the task in 7min 2sec, which is noticeably faster than other netbooks we've reviewed this year, such as the Samsung N150 (8min 3sec) and the HP Mini 5102 (8min 47sec).

The netbook's speed was even more noticeable in our Blender 3D rendering test, which can make use of all four virtual cores of the Atom N550 CPU. In this test, the Aspire One Happy recorded a time of exactly 4min, which is 3-4 minutes faster than what an Intel Atom N450–based netbook can achieve. This represents a big improvement in processing power. However, the netbook's hard drive returned a transfer rate of 21.41 megabytes per second, and its graphics card amassed only 151 Marks in 3DMark06, so you can see that the overall performance of the netbook is still, well, netbook-like.

In everyday use, the Aspire One Happy felt comfortably zippy, but like most netbooks, it did get bogged down when we multitasked a little too vigorously.

Besides the dual-core CPU, one of the other key features of the Aspire One Happy is the Android operating system that is embedded in its firmware. Similar to laptops that employ Splashtop technology, Android has been included simply so that you can get online quickly without having to first boot up Windows 7. It's not a recent version of Android, and the netbook doesn't have a touchscreen, so it's very limited in its functionality — it also doesn't offer access to Android Market, nor does it support Flash. 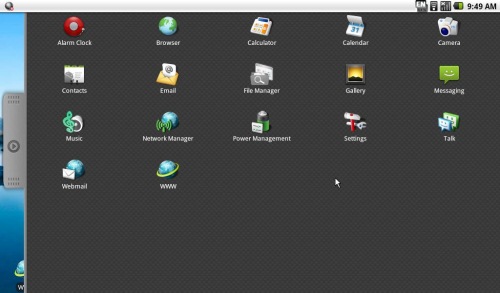 You can use it if you want to check your Google mail and Calendar, or to do some basic Web browsing, but apart from that, it serves no great purpose. Be aware that you can't implement security for the Android operating system — without a touchscreen, you can't set a multi-point gesture, and there is also no password support — so we recommend not letting Android remember your Google account details, just in case you ever lose the netbook.

Android can be set to boot by default by using the Acer Configuration Manager for Android in Windows. Because there is no touchscreen, you'll have to learn which shortcuts can be used to navigate the operating system: for example, Esc to go back, or the Windows key to return to the Home screen. The inclusion of Android is definitely interesting, but it's too limited to be of any use. We've pooh-poohed netbooks with touchscreens before (such as the Lenovo IdeaPad S10-3t), but we think that if the Aspire One Happy actually had a touchscreen and a more recent version of Android (with support for Flash and the Android Market), it would make a lot more sense (but probably be a lot more expensive). As it stands, the implementation of Android on this netbook is not very useful and shouldn't be a factor in your buying decision.

Aspire One Happy: Design and connectivity

The Aspire One Happy has a dainty design. It's very small, has a thin profile and it only weighs 1.15kg. Despite being so small, it has a relatively easy-to-use keyboard, on which there aren't any misplaced keys. The keyboard feels solid and the keys have good travel and bounce-back. The touchpad is small yet responsive, but we don't like its buttons — both the left- and right-click buttons share the same plastic, which sometimes makes them hard to press.

A small number of vent holes are located underneath the netbook. If you block them while you use the netbook on your lap, then the warm air generated by the internal components will be trapped and the chassis will become warm after a relatively short period of time (even if you're only browsing the Web).

The 1024x600-resolution screen is bright and even though it's glossy, it's still reasonably comfortable to view in bright light. It features a 1.3-megapixel webcam in its bezel. Around the edges of the chassis, you'll find an all-too-familiar gang of ports: VGA, 10/100 Ethernet, headphone, microphone and three USB 2.0 ports. An SD card slot has its own turf on the right side of the chassis. For wireless networking, you get an integrated 802.11n Wi-Fi module and Bluetooth.

You'll want to use the soft protective cover that ships with the Aspire One Happy (or a tougher one of your own choosing) if you want to keep its pretty purple lid free of scratches. We neglected to use a cover when transporting the Aspire One Happy in a backpack, and it was scratched by a camera we were carrying in the same bag.

What we love about the Aspire One Happy is its 6-cell battery, which almost allows you to go through an entire typical work day without plugging in to an outlet (depending on how bright the screen is and whether you run any CPU-intensive tasks). In our rundown test, in which we disable power management, maximise brightness, enable Wi-Fi and loop an Xvid-encoded video, the Aspire One Happy lasted 5hr 5min, which is a marvellous result for a netbook. This is even better than what the HP Mini 5102 achieved in the same test, and also better than the HP Mini 5103, which recorded five hours flat.

With excellent battery life, a light weight and a slim design, the Acer Aspire One Happy is perfect for business users, students and basically anyone who is always on the go. Its small size makes it easy to use while on public transport (as long as you have a seat), and frequent flyers should appreciate the netbook's ability to get through five hours of standard-definition video playback on a single charge. The performance of the Aspire One Happy is also much better than a typical netbook thanks to its dual-core Intel Atom N550 CPU. We're not sold on the implementation of Android though, which we think serves no useful purpose on this netbook.