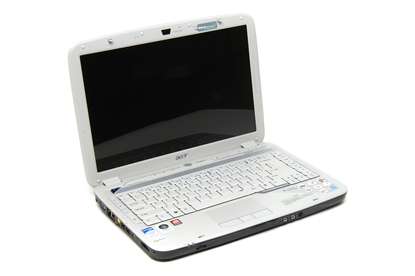 Acer's Aspire 4920G is a good all purpose notebook. It doesn't excel at any one thing, but for users wanting a little gaming, movie watching and general desktop PC activities, crammed into a stylish package, it is a strong contender.

It's rare to find a laptop with an interesting aesthetic that actually stands out somewhat from the crowd, but Acer's Aspire 4920G manages this quite nicely. Fitted with what they call a 'holographic casing' it certainly looks very smooth. While it isn't the most powerful system on the market, it will be more than adequate for basic usage in a variety of situations.

It sports fairly strong specifications; an Intel Core 2 Duo T5450 processor running at 1.66GHz, 2GB of RAM and an ATI Radeon X2500 graphics processor. In our benchmarks it performed about as expected. Its score of 67 in World Bench 6, which runs the machine through a variety of general computer use tests using real world software, indicates good but not excellent general power. This system will be suitable for most of your needs including web browsing, word processing and some light graphics work. However serious imaging, video or audio specialists will need something with a bit more grunt.

We also ran the 4920G through our encoding test, which encodes 53 minutes of WAV files into 192Kbps MP3 files using a piece of software called CDEX. It did the job in two minutes and 43 seconds, which is a reasonably good time considering the processor.

Our graphics tests proved this system is also suitable for some light gaming. It scored 2023 in 3DMark 2006, which is a decent but not outstanding result. We tried running F.E.A.R, which is one of the more demanding titles on the market, and it did run, although we wouldn't call it playable. The 4920G will be fine for the occasional death match or bout of old school gaming, but for cutting edge titles it doesn't quite cut the mustard.

While the performance of this system is fairly good, its real standout element is the design. While we don't quite understand how the exterior is 'holographic', it certainly does look cool. The glossy charcoal exterior with black etching is extremely stylish and it is embossed with an Acer logo that seems to hover partially above the rest of the casing. It opens to reveal a smooth grey interior, with several LED lights that change colour depending on the system's status. Combine this aesthetic with the curved edges and you have a somewhat clamshell look that is quite refreshing in a world filled with hard edged, dull, grey business machines.

The system comes with a 14.1in 1280x800 resolution screen. During our film and gaming tests it held up nicely exhibiting good colour and crisp, sharp edges. There was some minor ghosting during fast paced action scenes, but as the display only has a response time of 16ms, this is to be expected. Viewing angles were disappointing though. Colour shift was very prominent when viewing the notebook from any sort of sharp angle, making it less than suitable for more than one user at a time.

Acer packs in a fairly impressive set of Dolby Virtual Surround speakers into the 4920G. Running along above the keyboard, these speakers produced some excellent sound during our home theatre tests. We'd still recommend a high quality pair of headphones if you wish to truly enjoy your movies, music and games, but for basic day-to-day use the included speakers are more than adequate.

The keyboard is extremely comfortable to use and we found it suitable, even for long word processing sessions. Thanks to the large display, there is plenty of room, so everything is nicely spaced out. Running along above the keyboard are a string of media controls while down the left hand side are several shortcut keys to functions like email and web browser.

A 160GB hard drive is included, which is a huge amount of storage for a notebook. If you do manage to fill that up however there is also a DVD-RW with Duel Layer recording. For connectivity there is 802.11a/b/g wireless as well as an Ethernet port, but sadly Bluetooth isn't present. There are four USB 2.0 ports, FireWire, both VGA and S-Video connections for external display devices as well as the obligatory headphone and microphone jacks.

During our battery test, the system performed moderately, but proved it isn't the ideal notebook to take with you on the road. We tested it by playing a DVD on loop, which is one of the most demanding trials you can put a notebook through, as it drains not only the components but the optical drive, display and speakers as well. The 4920G lasted one hour and twenty minutes in this test, which is a fairly standard result. You'll be fine using the PC between the office and home on the train or similar activities, but for long trips away from power, or media intensive activities on the road, you'll need to look elsewhere.