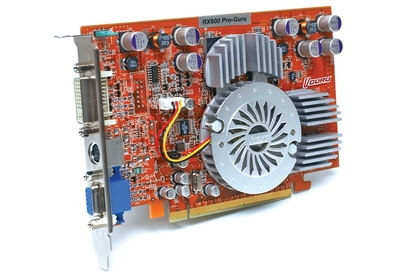 The jumper adds novelty, but ultimately this card is outperformed by the competition. Worth considering for a budget system but not much else.

While this card is based on the X600 Pro chip, it has a feature that have not seen on other cards: a jumper setting that can be manipulated to make the GPU run at X600 XT speeds. The GPU/memory clocks are set at 405MHz/512MHz by default, but when the jumper is enabled, the GPU clock soars to 500MHz, while the memory stays the same. This is what ABIT calls turbo mode, and while we did see an increase of 4 to 6 frames per second across all tests when it was switched on, this card's performance was nevertheless much slower than many cards reviewed in this section, most likely due to its slower memory clock. Changing the jumper setting would require reinstalling the graphics driver.

An active cooling solution is located atop the GPU of this card and it is quiet during operation, but its 256MB of memory does not have any cooling devices.

This card is inexpensive and ships with PowerDVD 5 as well as a software overclocking utility. It does have both standard VGA and DVI outputs, so it can be used in multiple monitor environments, and it also has TV-Out support. Cables for these functions are supplied.