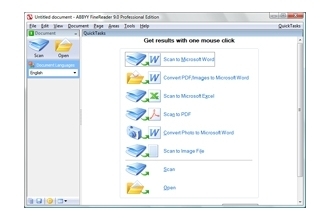 As with OmniPage, you need to use OCR a lot -- particularly with such things as digital images -- to make the investment in ABBYY FineReader 9.0 worthwhile as an upgrade. However, accuracy in our tests was very good, even with distorted photographs. Serious users will probably find OmniPage better for features, but those handling a large number of documents will appreciate ABBYY FineReader 9.0.

Users needing an OCR program to handle a large number of documents will appreciate ABBYY FineReader 9.0.

In recent years, with faster processors and inexpensive memory, OCR (optical character recognition) software has matured to the extent that importing and recognising text from clean scanned documents is almost perfect in all the main applications available today. Indeed, basic OCR software has become so good for this that computer users need a good reason to upgrade from the free programs bundled with most scanners.

The core technology for ABBYY FineReader 9.0, what ABBYY calls adaptive document recognition technology, is one refinement. This means that, rather than scanning piece by piece, the software looks through the entire document first. This gives it a much better shot at working out what sort of document it is, how it's arranged, whether there're any footnotes and how they're done etc.

In fact, ABBYY FineReader 9.0 now does a good job of handling such things as headers and footers, footnotes and lists -- these appear as an appropriate part of a final Word document rather than simply being placed in a text frame on the main page.

ABBYY FineReader 9.0's tendency to try and strip text out of images, however, resulted in a number of errors in our tests, misrecognising graphics that would be better left as images.

Otherwise, accuracy for straightforward scanned documents was comparable with OmniPage Professional 16. Like its competitor, ABBYY FineReader 9.0 also works well with photos taken from digital cameras, providing tools that can automatically remove distortion caused by page curves or misaligned books. These were introduced in ABBYY FineReader 8.0, but now have been developed so that a photograph can be converted to a Word document with a single click.

Indeed, similar tweaks run throughout ABBYY FineReader 9.0's entire new interface -- going for what ABBYY calls its Results-Driven Interface: this includes a QuickTasks window for such things as converting images to Word or scanning to PDF, and these are also available from the Windows Start menu.

ABBYY FineReader 9.0 integrates well with the latest version of Office, and the QuickPreview is a welcome addition.

As with previous versions, ABBYY FineReader 9.0 handles PDFs both as items that can be converted to editable documents or as the end format for scanned items. As with all OCR packages on the market, this is now standard. However, the whole process is handled competently so that, for example, document metadata (title, author, key words) can also be extracted and saved with the final document.

One area where ABBYY FineReader 9.0 has always scored well is in terms of support for foreign languages, with 179 supported in a multitude of scripts, including Greek and Cyrillic, and with spell-checking for 36 languages.

A final enhancement of ABBYY FineReader 9.0 possibly worth considering is the ability to extract text from screenshots. While many users may not save screenshots on a regular basis (and the proposed use for Web pages ignores the obvious copy and paste function that works well with 99 per cent of sites), this could be extremely useful if you need to get data from a Flash presentation or a snapshot of a PDF.