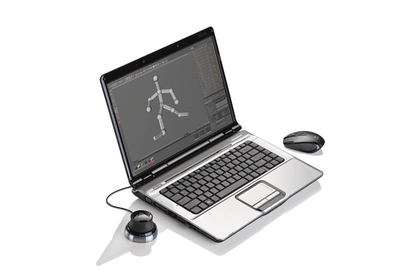 The SpaceNavigator for Notebooks is of limited appeal to most 3-D creatives — but if you're in its target market, you may find it invaluable.

3Dconnexion's line of input devices for 3-D suites — which it calls 3-D mice — are tools that aim to make it easier to work in animation tools such as Maya, 3DS Max, LightWave and Cinema 4D than traditional '2-D' mice.

The least expensive model in the range is the TV-quiz-show-buzzer-shaped SpaceNavigator — and 3Dconnexion has now released a smaller version for use alongside laptops for 3-D creatives on the move.

To make this version of the SpaceNavigator truly portable, 3Dconnexion has reduced the original model's weight by half and made it significantly smaller. Though it's light, its solid base stops it sliding across your desk. The device comes with a stressball-sized padded travel case.

In use, the SpaceNavigator for Notebook works the same as its desktop brother — offering the same pan, zoom and rotation controls by tilting, pushing-and-pulling, and twisting the device's central section. This makes navigation around 3-D scenes much easier than using a tradition mouse. There are two buttons on its side that replicate the actions of your mouse buttons.

Most 3D tools are supported by the software — from the major 3-D suites to Photoshop. There are some notable omissions though, including modeller's tools such as Mudbox and ZBrush.