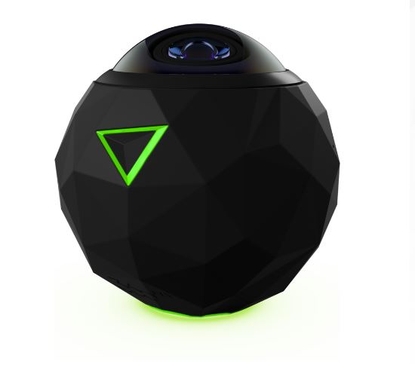 It's taken some time but the plethora of software updates to the 360 Fly 4K camera make it feature packed, fast and reliable.

We’ve been toying with the 360 Fly 4K action cam for many months now and it’s looking more and more useful all the time. Not only are Facebook’s 360-degree videos booming in popularity but Virtual Reality videos – as viewed on mobile phones with basic headsets – are too. Creating content for these set-ups (and others) can be an epic palaver and an expensive one at that...

At the high end, you have to get multiple cameras, synchronise them, use some expensive software and a powerful computer to do some serious editing, stitching, straightening, exposure adjustments and more stitching. With the 360 Fly, much of this is unnecessary and you can do most of the rest on the app on your phone – before publishing it somewhere like Facebook in just a couple of screen touches.

The camera is basically the size and shape of a large golf ball. It’s ruggedized to IP6X which means it’s dustproof, can be dropped up to 1.5m and is waterproof to one atmosphere. It can operate between -40C to 400C

The camera records a horizontal, full 360-degree plane and a large, vertical 240-degree arc. It can be a bit tricky to get your head around but you basically mount it facing up or facing down. The only area it can’t is see directly beneath the lens. What you’re generally left with is a horizontal, 360-degree panorama view plus the sky plus a significant chunk below the horizon. It sounds like a fish-eye lens – and while the images it captures can be displayed like that – the high resolution of those images means that you can look at one segment of the whole image at a time with relatively-little distortion. As such, if you’re accessing a 360-degree video or photo you start by looking in one area and then either drag the image around (or move your head with a VR headset) and look at the rest of the image. If that’s still too hard to imagine, check out these example videos, here.

Recent updates to the software (which is updated frequently) mean that content can now be shared onto Facebook as a 360-degree video in just a couple of button presses.

Video is recorded at resolutions of 2,880 x 2,880 at 30fps or 24fps plus 1,728 x 1,728 at 60fps. Video is recorded to the device but you can see a live view on your phone via the app at the same time. You need to download the video from your device to use the full-resolution footage though.

There’s also a Point Of View (POV) mode whereby the camera shoots just what’s in front of the lens (you might not want to (or be allowed to) shoot the audience at a play/concert, for example). Or you just want your viewers to focus on one area without looking around too much.

Quality is impressive. While there will always be some fish-eye distortion, the camera's dynamic range is such that it can cope impressively with shots that have both bright and dark areas at the same time. Colours are natural and images are generally sharp. While content won't stand up to big-screen features in the same way that multiple, 4K, stitched-together GoPros will, that's beyond the remit of this camera which will suit everything from a large TV down.

Built in are GPS, accelerometer and gyroscope. The resulting metadata is already being used by the likes of Racerender.com to apply motor-racing-style overlaid telemetries to videos. They also assist with the accelerometer-triggered, motion-triggered and sound-triggered recording modes, all of which work very well.

Physically, the Fly 360 has a standard ¼-20 screw thread although it will also connect using QuickTwist technology on compatible mounts.

Initially, set-up was via Bluetooth and therefore could be a complete pain in the backside. However, updates mean that connecting directly by WiFi is much quicker and more reliable (you can also choose between 2.4GHz and 5GHz frequencies).

The built-in microphones aren’t great but recent updates mean it can finally be paired with a Bluetooth microphone in the settings.

Thanks to the updates, usage is more-often-than-not a breeze. There’s only one button on the exterior and this turns the 360 Fly on or off after lengthy presses. A short press will start it recording with either the default video settings or the last settings you used in the app. It vibrates when starting and stopping. All other functions are denoted by the main button’s colourful flashing lights.

There’s 64GB of memory on-board which will provide enough space for the 2hrs continuous recording afforded by the 1,710mAh battery.

The App is (now) well-designed and very intuitive with even the most complex features being simple to set-up and adjust. We’ve also found that downloading videos to the phone takes less time than it used to thanks to improved WiFi reliability and speeds.

Once on your phone, there are now numerous ways to export content direct to social media and other apps. If you want to edit it on a Windows PC or Mac, then a 360 Fly Director Desktop program is also available for free.

Next: Accessories and Conclusion