Mafia II fails to fully deliver on its immense promise 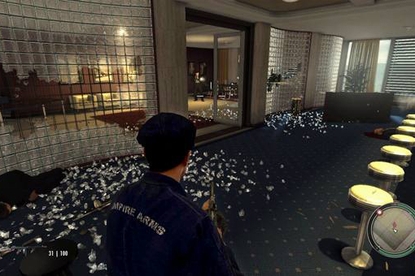 With a beautiful and interesting setting, a likeable cast of characters and a decent dose of action, Mafia II had the potential to add a new and exciting layer to the established myth of the American mobster. But even though it offers some worthwhile moments, it unfortunately squanders most of its vast potential on a heavily scripted experience that doesn't take full advantage of the compelling world around it.

Mafia II hits all the bullet points you'd expect from a modern action escapade. It's set in a fantastic city called Empire Bay, a lively metropolis influenced by New York City and San Francisco; it features some of the best cinematography I've seen in a game; it perfectly captures the spirit of its era--the 1940s and 50s--through smart use of imagery and music; and it has more than its fair share of violence and about as much salty language as you can reasonably fit within a twelve hour campaign.

But while Mafia II offers up a polished and well-constructed package, it never fully delivers on its immense promise, as the linear adventure and superficial storyline fail to give any real weight to the actions and emotions of its antiheroes, or even dig very deeply into the mobster mythos. It's a pleasant and finely crafted experience, but the only emotion it was ultimately able to instil in me was ambivalence, both towards the events I took part in and the characters I met.

2K Czech has done an impressive job of building a world with a sense of life, and Empire City shines throughout the multi-decade affair, with period-era imagery and a fantastic array of licensed songs like "Praise the Lord and Pass the Ammunition" and "In the Still of the Night" further increasing the level of immersion. Unfortunately, Mafia II's complete lack of side missions and extra activities makes the polish and grandeur of Empire Bay feel like a missed opportunity.

The game is laser-focused on its 15 campaign chapters, with each task directly related to the next until your adventure is complete; as such, you're never given a great chance to fully explore the bustling city's wonderfully distinct neighbourhoods. It's such a compelling and well-built world, yet cruising around yields no discernible benefits or consequences. Even police chases--a riotous and entertaining staple of Grand Theft Auto and other games of this ilk--aren't worth the effort here. Cops will shrug you off in a heartbeat if you disappear from view, and you can often just drive to a secluded area and introduce them to your shotgun without the fear of retribution from police back up.

Most of Mafia II's memorable moments come from the cinematics and not the actual missions, which consistently lack exciting gameplay opportunities. Cover-based gunfights dominate much of the action, with occasional stealth segments, but the action feels very rote and familiar, and doesn't stack up to the combat found in other titles. You'll also be forced into fistfights at various points, but the stiff and simplistic controls feel underdeveloped, making these encounters feel like a chore. And though the game is loaded with era-appropriate vehicles (including boat-like cars and sweet little coupes) that can be customised and stored, Mafia II only features a handful of chase sequences.

The storyline and character development never lives up to its end of the bargain, either. Main protagonist Vito Scaletta is a man haunted by his past, the regrets of his fallen father, and the struggles of one's loyalty to his birth family and criminal organisation, but all too often, these potentially fascinating threads are left undeveloped, lingering in your thoughts only for a brief moment like superficial bits of window dressing.

I don't expect every mob portrayal to have the weight and depth of character of The Godfather or The Sopranos, but Vito's familiar tale of greed, betrayal, and tragedy neither makes you feel remarkably powerful nor offers any particularly important insights. Every revelation is a fleeting thought, quickly drowned out by gunfire and expletives. Even the ending lands with a thud, capping off twelve unsatisfying hours spent vainly hoping that the next chapter would ignite something in the middling tale. This is especially disappointing considering the stellar cinematography and solid voice work present throughout.

That's a common theme with Mafia II: it's competent and occasionally strong in nearly every area, but it never lives up to its full potential. The immense allure of Empire Bay and its trappings help make up for Mafia II's missteps, but the game fails to add anything meaningful to both the mobster mythos and the genre as a whole.