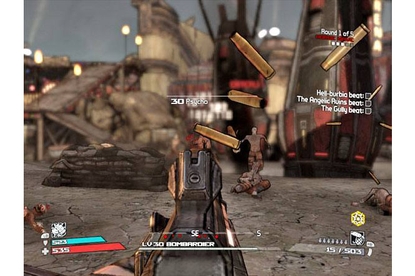 Gearbox's second DLC content update for Borderlands is all about action: featuring the Underdome, a riotous arena where death and mayhem rule, it's a worthy download that brings a Gears of War Horde mode like experience to the world of Pandora. Unfortunately, there are a couple of issues that keep it from being a must-have purchase; however, it is still a fun and interesting diversion.

Gearbox’s latest content update for its massively rewarding title, Borderlands, offers anyone with a character level 10 and over one the toughest trials they've faced yet: the Underdome. Ruled by Mad Moxxie, a megaphone wielding vixen straight out of the rabbit hole, it houses three Riot Arenas where Smash TV-seque tournaments are held.

The “Riots” are pretty much Borderlands' take on Gears of War's Horde or Halo's Firefight modes, but it adds a twist to the classic onslaught of enemies. Instead of one group of enemies followed by another of the same type, the rounds consist of five distinctly named waves, like the psycho-filled Horde Wave or the aptly named Badass Wave, and each provides their own distinctive challenges.

Between each wave, you’re given a brief reprieve to restock on ammo and health that rain sporadically across the arena. If you manage to survive through the entire round, Moxxie rewards you with a weapon drop; unfortunately, the rewards are less than impressive, especially if you’re a high level character. And, as was the case with the previously released DLC pack, Zombie Island, you don't gain experience no matter how many hundreds of bandits you kill. But you do get a bank to store extra goods and the three arenas that compose the Underdome provide a great sense of challenge.

What makes Mad Moxxie more than just a mindless experience is the way the demented host starts toying with the playing field after the first round. She plays little tricks like altering your accuracy, reducing gravity or boosting the damage dealt by SMGs above all other weapon types. These combat modifiers inject a lot of variety into the otherwise straightforward action but you can get stuck with some very unlucky combos, leading to a decidedly unfair fight. I will also warn you that the Underdome is not meant to be tackled solo. Borderlands has a strong multiplayer focus to begin with and Mad Moxxie is clearly designed with teammates in mind; when you die, for instance, you’re tossed into a penalty box from which you can observe and take the occasional long-range pot shot. If you have teammates who are still in the fight, you can lend support fire, but if you're alone, landing in the box is the equivalent of a ‘Game Over’ screen. Without teammates to watch your back, the Underdome is nearly impossible to survive.

Of course, that’s nothing new with Borderlands, and Mad Moxxie is definitely a good deal for players looking for more co-op mayhem; it’s also a great challenge for gamers who’ve reached the level 50 cap. It would have been nice if Mad Moxxie lifted the level cap, but it still offers enough mayhem to make it worth the download for any Borderlands player looking for a little mindless killing.