Another Phison design turns in stellar performance at a very nice price point. 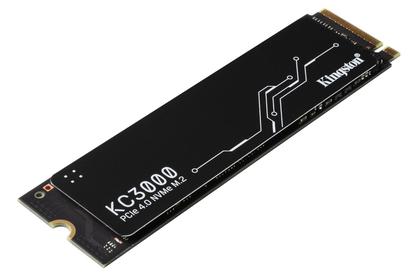 Man, was the Corsair MP600 Pro XT‘s reign as top dog short. Only a couple of weeks after taking the performance crown (sort of), it loses it to the Kingston KC3000, the new best SSD in the land. True, Corsair didn't lose the title by much, and it wasn't a total shock given that both use Phison's latest E18 controller and 176-layer TLC NAND. Still, our sympathy to Corsair and congratulations to Kingston.

And congrats to you as well. You now have three lightning-fast PCIe 4 NVMe SSDs to choose from when you include Seagate's FireCuda 530. Just make sure you have a fairly modern computer that can support PCIe 4.0 before you splurge on one of these hotrods.

Kingston's KC3000 may look boring, but its performance is anything but.

The KC3000 is your standard 2280 (22 mm wide, 80 mm long) form factor commercial NVMe SSD. I've already given away the controller and NAND, however, there's also 1GB of primary DRAM cache for every 1TB of capacity.

Secondary caching is the main TLC employed as SLC, i.e., data is written to it as a single voltage level (one bit), rather than one of fifteen (three bits). How the amount of TLC as SLC required is determined wasn't disclosed, but whatever is being done, it's being done extremely well. The only fluctuations of note were exceedingly minor and occurred during the 450GB sustained write.

The numbers rolling out of the benchmarks and off the stopwatch for the KC3000 were hauntingly familiar—I just saw them from the aforementioned Corsair MP300 Pro XT. Indeed, the difference in speed between the KC3000, Corsair, and Seagate FireCuda 530 is hardly worth mentioning. It's so close, you should buy on price and other factors. Still, as you'll see below, the KC3000 is the fastest of the three in CrystalDiskMark and our 48GB transfer tests— though only by a gnat's eyebrow.

Note that the lighter gold is the KC3000's performance over PCIe 3. I've included it because, well, I've been asked to by readers. Buying a PCIe 4 drive for a PCIe 3 PC is a waste of money unless you plan to take it forward with you to a newer PC. 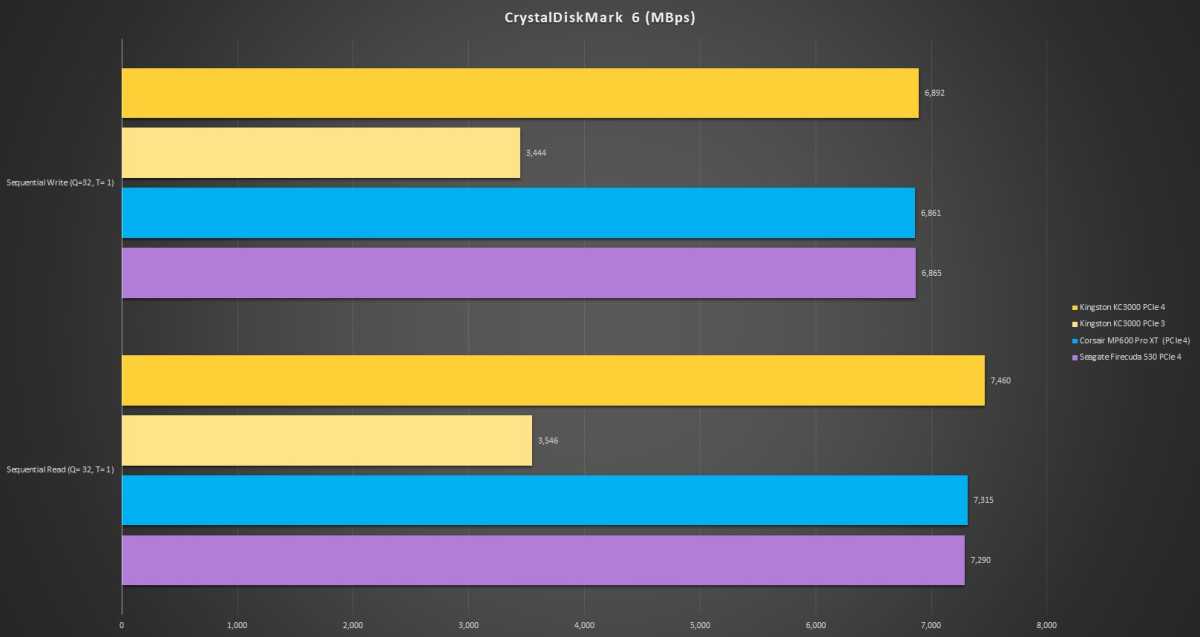 The Kingston KC3000 set a new record in CrystalDiskMark 6, though only by a hair over its rivals. Longer bars are better.

As you can see above, the KC3000 bested both its rivals in CrystalDiskMark 6 by a small margin. Note that we do test using CrystalDiskMark 7 and AS SSD, however, for comparison with older drives, we stick with the version 6 CDM results, which are still perfectly valid. 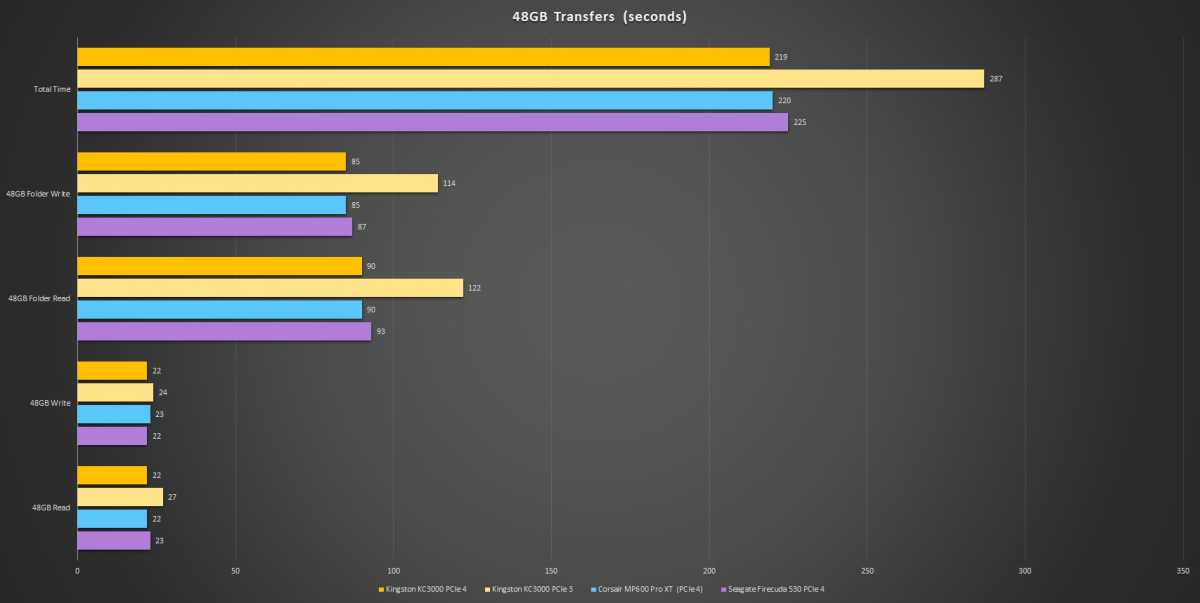 The KC3000 was the fastest by a mere second at our 48GB transfers shown above. But fastest is fastest; every second counts; you're not getting any younger… 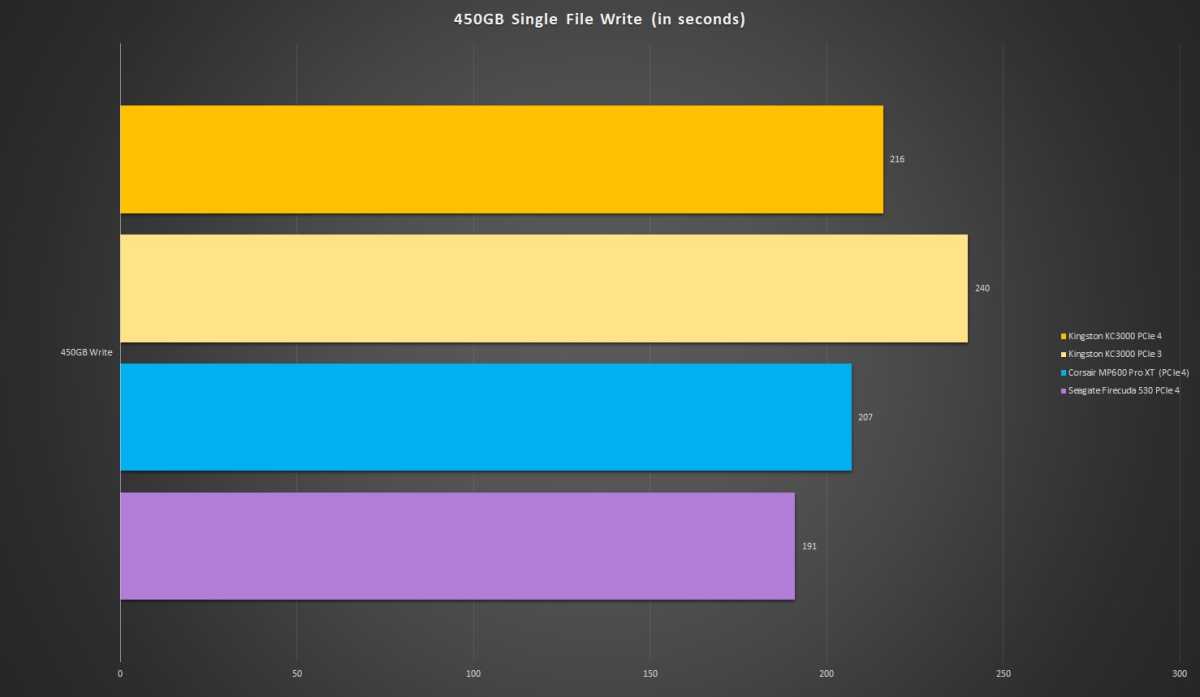 The on test that still sets the FireCuda 530 apart from the rest is the 450GB sustained write. The KC3000's time is nothing to sneeze at however. Shorter bars are better.

The only test where the KC3000 fell marginally off the pace was in our 450GB sustained write—something most users won't do very often, if ever. 3 minutes and 36 seconds is still a very fast time.

The PCIe 4 testing was done on an MSI MEG X570 motherboard socketing an AMD Ryzen 7 3700X 8-core CPU, using the same Kingston DRAM, cards, and benchmark software. ImDisk replaces Softperfect as the RAM disk. All testing is performed on an empty, or nearly empty drive that's TRIM'd after every set of tests.

Write performance will decrease as the drive fills up. In some rare cases, components may change for the worse. Kingston has been accused of substituting slower parts before. If your drive, given similar hardware, does not perform as well as our test unit, please let us know.

The Kingston KC3000 we tested is a fantastic NVMe SSD that's fast via PCIe 3 or 4. As mentioned, it's pretty much a pick 'em with the Corsair MP600 Pro XT and Seagate FireCuda 530. Base your decision on price, TBW, warranty, availability, or which company you prefer. You'll love any of the three.