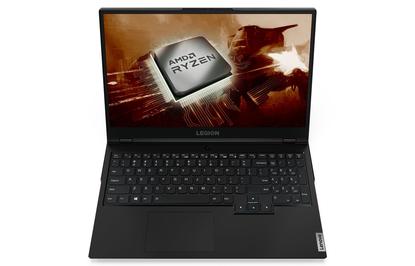 If you need yet more proof that AMD’s modern Ryzen processors are on a roll, consider Lenovo’s latest move. This week, the company added Ryzen options to five different Legion gaming systems, spanning laptops and desktops alike. That would’ve been unthinkable just a year or two ago, but AMD’s Ryzen current CPU lineup goes toe-to-toe with the best Intel chips on offer. Not all of them will be available in North America, alas.

Let’s start with the laptops, since AMD only became competitive in notebooks with this year’s game-changing mobile processors. The Lenovo Legion 5 leads the charge. Available in both 15-inch and 17-inch flavors, the Legion 5 will be available with up to the Ryzen 7 4800H, which offers 8 cores and 16 threads with up to 4.2GHz boost clock speeds.

It’ll be offered with graphics options up to an Nvidia GeForce RTX 2060—few Ryzen gaming laptops from any company come with a GPU more potent, sadly. You’ll be able to put that graphics firepower to good use on their blazing-fast 144Hz displays, and you can complete the package with up to 16GB of DDR4 memory and 1TB of PCI-E SSD storage.

Beyond the internals, Lenovo’s put some nice extra touches on the Legion 5. The TrueStrike keyboard offers deep key travel, white backlighting, 100 percent anti-ghosting, and soft-landing switches, the company says, while its Coldfront 2.0 technology helps to keep thermals in check. The audio shouldn’t slouch either, thanks to the inclusion of Dolby Atmos technology and Harman Kardon speakers.

The 17-inch Lenovo Legion 5 should start at $1,090 when it launches in September, while the 15-inch Lenovo Legion 5 will cost $760 with a GeForce GTX 1650 Ti inside or $1,020 with a GeForce RTX 2060 inside when it launches in August. If you want to play around with real-time ray tracing in next-gen games, you’ll need to opt for the pricier RTX option.

The 15.6-inch Lenovo IdeaPad Gaming 3 offers more modest (but still solid) hardware at a more affordable price. It still packs up to the 8-core Ryzen 7 4800H but comes with Nvidia’s GeForce GTX 1650 Ti paired with “up to” a 1080p display at 120Hz. Watch out for slower, lower-resolution screens on the starting configurations, in other words—you don’t really want to dip below 1080p resolution on a 15.6-inch display if you can help it.

You can equip the IdeaPad Gaming 3 with up to 32GB of DDR4 memory—more than the Legion 5, oddly enough—and a 1TB PCI-E SSD. This laptop comes with blue keyboard backlighting and Dolby Audio onboard. Look for it to start at $660 when it launches in July, a pretty damned compelling price for an entry-level gaming laptop.

Moving onto a more stationary system, the Lenovo Legion Tower 5 packs up to the AMD Ryzen 9 3950X, a monstrous 16-core, 32-thread overclockable processor that we called “an epic end zone dance over Intel.” It’s probably overkill for a gaming tower, and the GPU options top out at a GeForce RTX 2070 Super rather than Nvidia’s more potent RTX 2080 and 2080 Ti options, which makes for a somewhat weird configuration. If you’re aiming for maximum gaming framerates from a high-end system, you’d be better off with a lower-cost processor and those pricier RTX 2080 graphics cards.

Nonetheless, Lenovo isn’t offering that. The Legion Tower 5 also comes with up to a pair of 1TB PCI-E SSDs, a pair of 2TB hard drives, 128GB of DDR 4 memory, and Wi-Fi 6. Considering its configuration, this could be a potent rig for video editors and other content creators.

The spacious 26-liter desktop ships with “larger fans” that can be set to three different speeds using Lenovo’s included Q-Control software. It ships with an air tower CPU cooler rated for up to 150W, but the company also offers a 200W liquid-cooling solution as an upgrade. The Legion Tower 5 also includes a transparent side panel as an upgrade option, and the jet black chassis is augmented by blue LED lighting.

Lenovo’s gaming desktop will start at $830 when it launches in October, but don’t expect to get any of those high-end hardware options for anywhere near that price. The Ryzen 9 3950X costs $750 by itself on the street, for example. Hopefully it includes abundant configuration options so you can create a more balanced loadout for gaming, rather than going heavier on core count than most gamers need.

Lenovo also announced a new Legion 5P laptop and IdeaCentre Gaming 5 desktop with AMD inside, but those systems won’t be coming to North America.