Why do fake guns sound so cool? 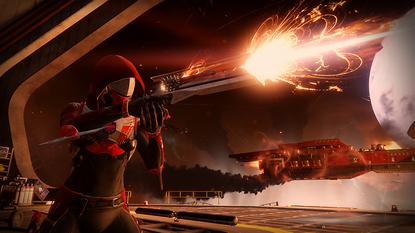 If you play a lot of first person shooters, chances are you have a favourite gun.

Maybe it’s the shotgun from Gears of War. Perhaps you’re a gal with her eye on Quake 3’s railgun. Sometimes you rely on a particular weapon because it’s strategically optimal or comes attached to a nifty visual effect. Other times, you just enjoy using the weapon because it feels good.

And an oft-overlooked part of what makes video game guns feel good is the sound design involved. You can make an in-game model as detailed or animated as you like but the noise it makes is a key part of what sells you on it. It’s a less visible - but all too critical - part of the craft.

Take last year’s Call of Duty: Modern Warfare, for example. In a blog post on the game’s official website, Stephen Miller, Audio Director at Infinity Ward, explains that “each weapon must have its own unique voice.”

“Whether it’s a gas piston, direct impingement, or bolt action, all of this brings a different type of voice to a weapon.”

The guns in Modern Warfare aren’t as intricately mechanical as their real world counterparts but the development team behind the game used the latter as inspiration. In pursuit of an authenticity that other game’s neglect, Infinity Ward tried to embed identifiable nuances within the sound signature of each gun.

Of course, if you’ve ever heard a gun go off in real life, that isn’t usually the kind of detail you’ll pick up on. Compared to the stylish and heightened recreations that incorporate and emphasize the physical mechanisms involved found in games like Modern Warfare, real world gunshots are the acoustic equivalent of blunt force trauma.

On a sonic level, they’re a more spartan occurrence. Most people aren’t going to pick up on the noise of the cartridge being ejected as much as they do the bang, crack or distant pop made when a real-world firearm is discharged.

And yet, when most people probably think of gunshots, they’ll often think of the sounds that firearms in games, movies and TV shows make before the real thing. The pew-pews of John Wick’s silenced pistol or the thunderous roar of the Terminator’s shotgun. Not the  piercing anomalies that accompany the latest atrocity to be captured by a passerby with an iPhone.

In the real world, the sound you hear when a gun goes off is a scary one. For many people, it’s the noise of trauma. Childish as the sentiment might read, fictional firearms sound way cooler - and you’d be surprised how little effort it takes to transform one into the other.

Joseph Dutaillis, an Australian sound designer and recordist with a decade of experience in sound effect production, says that “in real life it’s more of a crack type of sound than anything. Whereas when you’re watching a movie or something, it has more of a boom and a bass and a fuller sound to it.”

Dutaillis usually pulls gun sounds from a pre-existing library rather than record his own but has done so in the past.

“In Australia you don’t get that many opportunities to record real guns because of our gun laws,” he says.

Recording gunshots requires multiple microphones, all of which have to be equipped to handle a really high sound pressure level (SPL) and set to a very low gain level.

After all, Dutaillis notes, “You don’t get many things that are louder than a gunshot.”

He says that the location that the acoustic environment where the recording takes place also plays a role. A gunshot recorded on a grassy hillside sounds different than a gunshot recorded in a studio apartment or warehouse.

Asked whether authenticity or flavor is more important, Dutaillis says that it really depends on the emotion that you're trying to evoke in the audience.

“When you're recording, you just kind of want to get the cleanest recording you can.. You don't want it to peak. You don’t want it to distort. You want to give the person who's then going to handle it in post production the most flexibility to work with it.”

“Then, when you come to the sound design side of things, it really depends on the emotion that you're trying to draw from it. If you're working on something that's meant to be more realistic and gritty or something with more of a documentary feel, you want to have more of that realistic sound.”

Dutaillis points to another form of violence that gets a similar treatment to gunshots in the world of sound design: punches.

“Everyone kind of knows what a punch sounds like. It's just like skin slapping skin. But when you hear a punch in a movie sometimes it's like someone's hit you with a brick wall. It's like a boom! And again, that's kind of the choice of the sound designer and what they want to evoke in the audience.”

Dutaillis agrees that things like cop shows and war films have primed audiences to expect a certain noise from fictional firearms.

According to Dutaillis, “If you went and saw a movie where all the gunshots sounded like real gunshots, you'd be like this movie sucks.”

When those expectations aren’t met, it can distract audiences or damage their suspension of disbelief.

“You can make a gun sound like a cannon going off. And you might be able to get away with it, but if you don't then you've failed. You've done your job wrong.”

Asked what’s so appealing about the heightened gunshots found in fiction, Dutaillis has a theory.

“I think the bass sound has a lot to do with it. Humans like that bassy thump. There’s probably an argument to be made that it could go back to when we were first beating drums and making music.”

He says that “when you hit a drum, you feel it in your chest, whereas when you hear a gunshot in the real world, you don’t so much feel that.”

“When you’re firing a gun yourself, sometimes you feel that because there’s so much power and you feel that through your body. When you’re watching a movie, there’s no way we can feel that physical element of actually holding the gun but if you pump up that bass sound, that’s affecting the body a lot more.”

“It’s about having that fuller frequency sound of a gunshot rather than the crack.”

It’s long been a trope that real guns make scared people feel powerful but, when it comes to the sounds that fictional firearms make, the most important thing might be that they make you feel anything at all. When so much of what makes something cool is to do with the way it makes you feel, why should gunshots be any different?