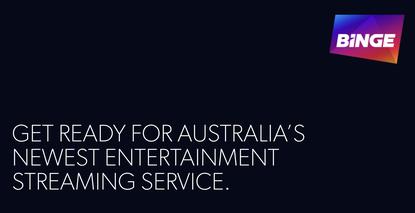 Foxtel have unveiled their latest attempt to carve out a compelling slice of the streaming market.

Binge CEO Julian Ogrin says that the service “speaks to the heart of what great entertainment viewing is about, something that is so good you can’t switch off.  Binge will provide permission to indulge in the shows you love and the shows you can’t get enough of; it’s entertainment that’s unturnoffable."

As an app, Binge is also looking to differentiate itself from the competition with a few features that go beyond the basics.

Users will be able to setup and sort their own "lists" of content they want to watch while the service's recommendation carousels will be curated by real people rather than just algorithms. While 4K playback isn't on the cards at this stage, the app will support offline downloads from day one.

Binge also promises to include more than just the final cut of content, with support for behind the scenes interviews, footage and other special feature. How extensive the implementation of this feature goes remains to be seen. Stan and Disney+ have a similar feature but adoption of it is pretty inconsistent.

According to Ogrin, “The time is right to unleash this new service providing Australians with the best in drama, lifestyle, reality and movies. With an amazing line-up of entertainment from the world’s best brands, Binge will have something for everyone, whenever you want to watch, on your favourite device.  And with new content added daily, there will always be something fresh to enjoy.”

In terms of launch platforms, Foxtel are looking to bring Binge to Apple TV, Android TV, ChromeCasts, Android and iOS initially. When it comes to Smart TVs, Samsung looks to be the first cab off the rank with other brands expected to get their own app later down the line.

Regardless, the pricing here looks more competitive than you'd expect. New customers will be able to sign on for a two-week free trial from the 25th of May via BINGE.com.au from as little as $10/month.

That standard tier gets you a single simultaneous stream and a maximum of standard quality. Upping to the $14/month tier gets you 2 streams and HD quality. For families, there's also an $18/month option that gets you a total of four HD streams.

Binge launches in Australia on the 25th of May.