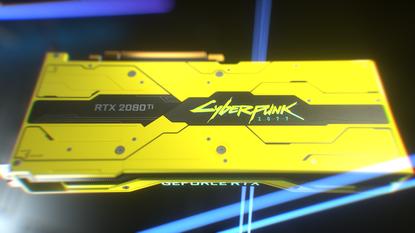 Nvidia and CD Projekt Red are partnering on a special limited run of graphics cards.

The good news? The GeForce RTX 2080 Ti Cyberpunk 2077 Edition will arrive before the game itself does.

The bad news? Nvidia aren't kidding around when it comes to the limited part of the run. According to the company, won't be available for outright purchase.

Instead, fans looking to get their hands on one will have to win one of the 77 Cyberpunk-themed graphics cards that Nvidia are giving away through a competition on Twitter, Facebook and the company's other social networking feeds.

That being said, Nvidia do advise those interested in winning one to "keep your eyes peeled for other giveaways and charity auctions" of the GeForce RTX 2080 Ti Cyberpunk 2077 Edition - which suggests that there might be additional opportunities to win one later down the lane.

As put by a press release from Nvidia, "Each has a custom AL5052 aluminum shroud, with Cyberpunk 2077’s signature yellow styling, and powerful GeForce RTX 2080 Ti hardware underneath."

Looks aside, this thing will net you more-or-less the same performance as any other Nvidia RTX 2080 Ti.

In addition to the graphics card, which Nvidia value at US$1100, winners will also net themselves a special edition Cyberpunk 2077 box.