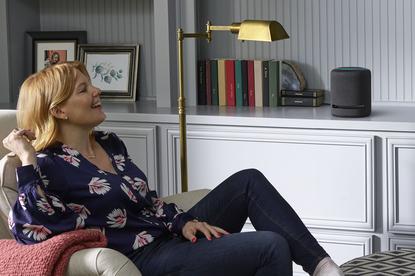 Amazon has confirmed that the newly-announced Echo Studio and a revamped Echo and Echo Dot will be coming to the Australian market.

The Echo Studio also boasts a 24-bit DAC, a power amplifier with 100 kHz of bandwidth and the ability to analyse the acoustics of the environment around it in order to optimise the experience - this thing is basically an Echo HomePod.

In Australia, the Echo Studio is priced at AU$329. It's available for pre-order on Amazon now.

In addition to the Studio, Amazon also announced a refreshed version of the original Echo and a new version of the Echo Dot that features an integrated LED alarm clock-style display. The latter is available for preorder now on Amazon for AU$99.

Available at a price of AU$149, Amazon say the refreshed Echo incorporates a 3-inch woofer and increased back volume that delivers stronger bass and clearer mids and highs over the previous model. You can find it on Amazon here.

Unfortunately, it looks like none of the weirder announcements at the company's recent hardware event look unlikely to come to Australia at this time. There's no word on local availability for the true wireless Echo Buds, the luminescent Echo Glow, the Echo Loop smart ring or the Echo Frames smart glasses.

The 3rd Gen Amazon Echo, Echo Dot with Clock and Echo Studio are available for pre-order now through Amazon.