Samsung’s Galaxy Fold nears its re-release, but a cheaper, more practical model might be on the way

Unless you have $1,980 burning a hole in your pocket, you should probably wait. 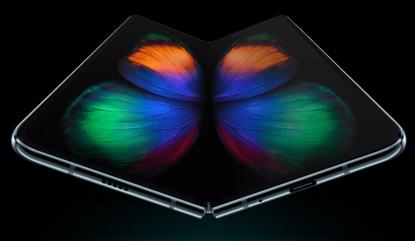 After months of testing and tweaks, Samsung is finally almost ready to ship its next-generation Galaxy Fold handset. Maybe. Even though a pre-order button appeared on the Galaxy Fold site on Samsung.com this weekend, you can’t actually pre-order the new phone just yet. Instead, you can sign up for more information, which will presumably be the new on-sale date, which is rumored to be later this month.

If you’ve forgotten, the Galaxy Fold is Samsung’s first handset with a foldable screen. On the outside, it has a small 4.6-inch display, but it can be opened to reveal a massive 7.3-inch screen with three-app multitasking and PC-like drag-and-drop support. Inside it’s very much a Note 10+, with a Snapdragon 855 processor, 12GB of RAM, and 512GB of storage.

Whether anyone is actually going to hand over $1,980 for the pleasure of using a phone that had massive issues the first time around is another story. Back in April, the Galaxy Fold was just days away from release when Samsung abruptly changed its plans following a spate of problems. Several review units that were sent out exhibited serious issues with the display and build quality.

In July, Samsung announced that it was confident the new Galaxy Fold design was ready for its debut. In a press release, it said it made a number of design and construction improvements—including securing the hinge and adding additional reinforcements to better protect the device from external particles—and once again touted the Galaxy Fold’s revolutionary form factor.

In fact, Samsung is so sure that folding phones are the next big thing, it appears it’s already working on a new model. According to Bloomberg, a smaller Galaxy Fold could arrive in 2020, with a 6.7-inch display that “shrinks to a pocketable square when it’s folded inward like a clamshell.” That form factor seems much more viable, with a screen size that’s similar to today’s phablets, and a practical fold that makes it easier to fit in a pocket. Also, Android and apps would presumably be able to run as usual, without requiring any re-engineering.

The report also says Samsung is working to make its second foldable device “more affordable and thinner” than the Galaxy Fold. That’s not saying much. At 17mm, the Galaxy Fold is thicker and it costs more than two Galaxy Note 10’s, so the followup model has a very low bar to clear. Even if Samsung manages to trim 20 percent off its thickness and price tag, the Galaxy Fold still be the thickest and most expensive handset around.

At any rate, the Bloomberg report indicates that Samsung isn’t giving up on the folding concept after the disastrous launch of the Galaxy Fold. With seven premium Galaxy phones and a Note 10+ that may have reached its size limit, Samsung’s folding phones could be the way of the future. Which means, you’ll probably want to wait to buy one.