It's smaller and cheaper than the Beacon 3, but just as smart. 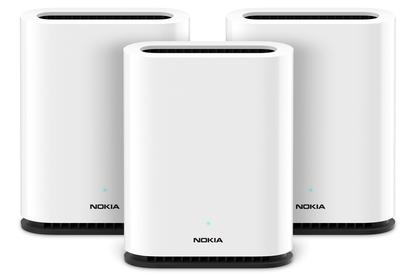 Nokia is doubling down on home networking. Just last year, the former smartphone titan acquired mesh networking startup Unium and bowed its first wireless router, the Beacon 3. Now the company is back with a sleeker, cheaper mesh router that can work in tandem with its pricier sibling.

On sale starting today, the $129 Beacon 1 (or $299 for a bundle of three) uses the same mesh-networking technology that powers the $199 Beacon 3, along with a new intelligent channel-hopping feature and a bridge mode that’s compatible with an existing router.

Dubbed “Intelligent Channel Selection” by Nokia, the Beacon 1’s smart channel-switching feature lets the router pick the best channels for the 2.4- and 5GHz frequency bands by analyzing nearby wireless usage patterns over time, rather than simply picking the clearest channels at the moment the unit is first configured.

The Beacon 1 also boasts a bridge mode, handy for turning the Beacon into an access point that you can use with, say, the combo modem/Wi-Fi router your ISP supplied.

The new bridge mode and intelligent channel-switching features are coming to both Beacon models, Nokia said.

Like many other mesh Wi-Fi devices on the market, Nokia’s Beacon routers eschew the clunky black shells and external antennas of traditional wireless routers for a sleek white design, with the Beacon 1 boasting more of an oval shape compared to the cylindrical Beacon 3.

Besides its standard setup and network configuration settings, the mobile app that accompanies the Beacon 1 and 3 routers features a heat map detailing the signal strength for any connected devices, perfect for pinpointing spotty wireless coverage areas. The app also comes with a signal indicator that helps you place the Beacon units in optimal spots in your home.

Nokia says the three-pack Beacons will come pre-paired, meaning that you’ll need only to configure the router that’s connected to your modem; once that’s done, the satellites should connect to the main router as soon as they’re powered on.