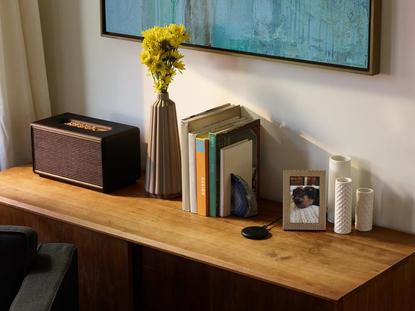 While the idea of walking around your house shouting commands and getting instant gratification like Tony Stark in his Jarvis-operated villa might be awesome, neither me nor my roommates have been willing to fork out the money for a standalone smart speaker just yet.

Between us, there are already probably about 4 wireless speakers already floating around the house. We don’t really need any more. Enter the Echo Input. Rather than having to buy a whole new sound system in order to make your home Alexa-compatible, Amazon now let you buy an accessory that you can connect with any existing non-Alexa speakers you own. Essentially, you’re just buying the ‘smart’ part of the device.

But just how easy is it to set up the Echo Input? Does it work just as well in practice as the regular Amazon Echo does?

Pulling it out of the box, I was pleasantly surprised by the inconspicuous design and size of the Echo Input. The device comes in at just 80mm in diameter and 14mm in height, making it incredibly easy to hide if you are like me and prefer your bench tops clean.

There’s nothing I hate more than a heap of cables laying around the house so the first connection option I tried between my UE Boom and the Echo input was via Bluetooth. The instructions that come with the device are extremely simple. They pretty much just direct you to the Amazon Alexa app, which then shows you a nice little animation of how the device works and takes you step by step through the set-up process.

While this process was very user friendly, it did still take a few attempts before the Echo Input would recognise and pair with my UE Boom.

I chose to set up the Echo Input in the kitchen as this is the centre of our home and the most used room.  I normally listen to music while I cook so I decided to give it a go and see how Spotify and TuneIn radio would work out.

TuneIn radio was super simple and came on straight away. Spotify on the other hand was a bit more tricky as I didn’t realise I had to set it up in the app first. Having not previously set it up meant that I then received a nice long sales pitch from my Alexa about Amazon Music Unlimited.

Once set up, I was easily able to request songs and artists by simply saying ‘Alexa, play Chameleon by Pnau’.

One thing that I did notice was that while I had music playing, Alexa really struggled to hear any of the commands that I gave. Once I noticed this, I tried moving it further away from my speaker. Unfortunately, increasing the distance between the microphone and speaker didn’t really help.

Still, despite my issues, the process of experimenting and trying to find a fix was actually quite enjoyable. My roommates were in the kitchen at the same time and quickly and decided the best way to have Alexa hear them was to stand on their chairs and yell directly into the microphone.  Their success rate was low to say the least.

It was only after I lowered the volume of my music to a much lower level than I’d usually set it to that Alexa started responding. Granted, I do listen to music quite loudly. Once I had turned down the volume on my UE Boom speaker, I tested out a few other commands that were suggested on the little instruction card that came with the Echo Input.

Asking for the weather highlighted another section of the app that I’d need to set up - as I received the weather forecast for Charlestown, USA. By contrast, Alexa was better when it came to random trivia and was genuinely really helpful when I needed to set a timer for my baking.

After connecting the Echo Input to my phone contacts using the Alexa app, I was also able to easily call and send messages to people - although this does become more difficult when you’ve chosen to  have some of your friends listed in your contacts as an emoji.

Overall, Alexa responded well to the commands we sent her way. However, there were a few times where she would seemingly hear our commands and not respond. Looking in the app, there is a history of all of the commands that Alexa has heard and you can actually report that she never responded - so it doesn’t seem like an uncommon problem.

I tested the Echo Input across a few days and noticed that despite the app saying that it would remember my speaker, I still found myself having to go through the entire syncing process multiple times. I did mix it up and try the AUX cable but still found it took that little bit longer than I wanted, since it still had to connect with my phone.

The Amazon Echo Input is a great little option if you are already happy with your current speaker setup but want to make the hi-fi in your household a little smarter.

Assuming you have all of your services connected and preferences prepared - Alexa can be quite handy and, priced at $55, the Amazon Echo Input is a cheap and mostly-painless way to trap her inside your home like a (polite) lingering spirit.