What is a Nvidia Studio laptop?

Here's what you need to know 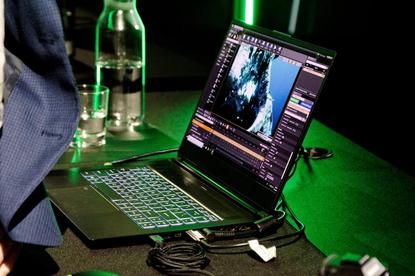 One of the biggest announcements out of this year’s Computex came out of Nvidia’s press conference. More specifically, it came in the form of the company’s new Studio laptop program.

Targeted at the next generation of content creators and power users who need more GPU power than their trusty MacBook Pro can provide, the Nvidia Studio line-up already includes devices from most major OEMs. Acer, ASUS, Dell, HP, Gigabyte, Razer and MSI are all accounted for.

“The new RTX Studio laptops are the perfect tool for creatives who need desktop-class performance while on the go.”

RIght up front, Nvidia Studio laptops are not manufactured or produced by Nvidia themselves. Like their G-Sync and Max-Q brands, Nvidia’s new Studio branding covers a range of OEM devices that meet a set of minimum specs. These include:

If a device meets the above requirements, Nvidia will bestow their official seal of approval upon it and add it to the official roster of Nvidia Studio branded notebook PCs. It's not yet clear if older notebook PCs that meet these requirements will be included.

There’s also a software component here called the Nvidia Studio Stack. This is a set of software tools that Nvidia say “are intended to provide digital content creators with the best performance and reliability when working with creative apps.”

The Studio Stack includes both NVIDIA Studio SDKs and APIs for app developers and NVIDIA Studio Drivers for creators. When paired up with an Nvidia Studio-graded laptop, Nvidia’s new Studio SDKs will help accelerate rendering, video editing and processing, 2D vector animation and more. Basically, you’ll be able to get accelerated performance on apps that are optimised for use with Nvidia Studio hardware.

At the time of writing, applications that currently incorporate Nvidia’s Studio Drivers include:

“Creatives who use Adobe Creative Cloud want the most powerful hardware for their content creation, and we know they will be excited about the new RTX Studio laptops and Studio Drivers from NVIDIA,” said Sue Skidmore, head of partner relations for Adobe video.