The CES Files: The Shift Drone 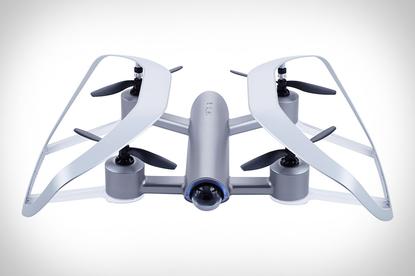 While our coverage of this year's CES in Las Vegas was pretty comprehensive when it came to the big name announcements like LG's rollable OLED R TV, there was plenty of smaller, more-niche gadgets and gizmos that we didn't have time to spotlight during the show itself and got a little buried in the noise of the world's biggest consumer electronics tradeshow.

We're taking a moment to appreciate and highlight each of these products up in a new recurring feature called The CES Files, which we'll be running over the next month or so. Without any further hustle, here's the first installment.

Though plenty of drone-makers have tried their best, drone controller schemes haven't really advanced beyond the usual realm of joysticks and apps. Until now. The Shift is a quad-copter drone with an unique and intuitive one-handed controller.

Based around a technology called Near-Field Micro Sensing, users hold the Shift's stick-like controller in one hand and wearing a connected ring on their thumb. Move your thumb in a direction, and the drone will match the movement.

It's a really neat hook that sets the Shift Drone apart from the competition in a meaningful way, even if the camera or flight time here isn't nearly as powerful as something like the DJI Mavic 2 Pro.

More info about the Shift Red drone can be found here. No word yet on pricing and availability.

You can read our The CES Files articles here.