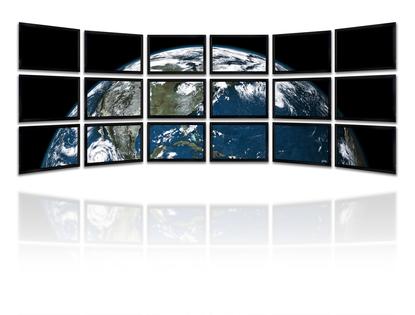 As next generation imaging and display technology hits the mainstream and threatens widespread acronym overload, digital content is increasingly being produced for consumption on high-definition devices. Here’s what you need to know and how to enjoy what’s on offer without breaking the bank.

Once upon a time, a TV was a TV and a monitor was a monitor. One was for play, the other generally for work and staring at a screen meant accepting the content as it was broadcast or produced. Today’s landscape is different, as the line between work- and play-based screen use is less defined, and monitors are increasingly utilised for leisure activities like video streaming and gaming.

Not so many years ago, as a viewer, worker or gamer, we didn’t give much thought to (or perhaps even know about) screen resolution and picture quality, but thanks to the advent of improved image definition, we now know how much better things can look. High definition (HD) technology delivered a far superior viewing experience than the standard definition (SD) we had always known, and the introduction of 4K has taken picture quality further again.

SD, HD and relatively new-kid-on-the-block, Ultra-HD (UHD or 4K), all refer to the resolution specs of a screen — or the number of pixels that make up the display. In the simplest terms; the more pixels, the better the picture. The latest wave of 4K technology is delivering UHD content with a sharper picture, greater colour depth and a level of fine detail that enriches any viewing or gaming experience.

Despite being a much higher resolution than its predecessors, 4K on its own is not really the game changer. The thing that unlocks that 4K capability and makes the picture truly come alive is something called high dynamic range (HDR) — a digital imaging technique that delivers a significantly improved contrast ratio. That improvement means that there is a greater difference between the brightest and darkest colours on screen and the enhanced depth of contrast allows the viewer to see a greater range of detail in the shades between the two extremes. In addition to heightened contrast, colours are notably brighter, with a greater number of discernible shades displayed. The upshot is an image that rivals real life, as the technology seeks to replicate what the human eye sees and lessen the ‘flattened’ quality that screen images have traditionally delivered.

But things are on the move locally, with Foxtel recently announcing the impending arrival of Australia’s first fully 4K-programmed channel (via satellite broadcast, rather than cable), with a focus on sports. Streaming services including Netflix, Stan, Amazon’s Prime Video, Google Play and YouTube currently offer a limited range of UHD content (mostly each of the services’ owned and produced “original” content), but this will naturally broaden. None of the available Australian free-to-air channels feature 4K content, but an increasing number of console and PC games are being produced for 4K and HDR.

Pricing on full 4K HDR-capable televisions is still sitting at the mid- to high-end of the scale, which may dissuade purchasers. That said, HDR and 4K are the future mainstream standards for screens and it’s only a matter of time before the currently limited library of available content expands significantly. 8K technology is also in the works but is realistically years away from commercial viability, so there’s no need to fear its imminent arrival.

Multi-functional monitor usage on the rise

HDR monitors offer the same enhanced brightness, contrast and colour range as 4K-ready televisions, with the added advantage of multiple preconfigured modes that allow users to select optimum display levels based on their application - whether that be gaming, Netflix-binging, streaming live sport or watching your favourite movie.

For anyone looking for a premium viewing or gaming experience quality, a 4K monitor with HDR capability is guaranteed to surpass expectation.