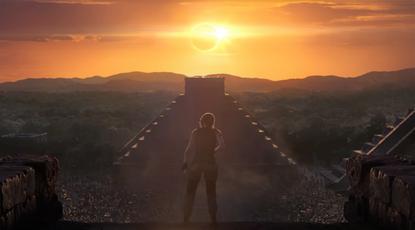 Rumors and leaks, rumors and leaks. Seems like every single 2018 release will be revealed by one or the other. This week it’s Shadow of the Tomb Raider, probably one of the worst-kept secrets, which Square finally confirmed is arriving later this year. Oh, and those rumors about Geralt of Rivia coming to Soulcalibur VI also turned out to be true.

That news, plus a Pillars of Eternity II delay, a no-hit Dark Souls trilogy run, a new game from the Goat Simulator crew, release dates for The Crew 2 and Skyrim VR, and a beautiful EVE Online tribute to Stephen Hawking.

Uh...not much to add to this one except that it exists, and it’s coming. Square claims Shadow of the Tomb Raider will release on September 14, an extended reveal is coming in April, and there’s the short cinematic teaser below. Cool logo, at least.

Skyrim VR was slated to come to PC at some point, but now we finally have a proper release date: April 3. That’s a bit sooner than I expected—I thought PlayStation VR would have six months exclusivity, not four and a half. But hey, good news for Vive owners.

And good news for Oculus owners, too. That’s the really surprising bit. After shunning the Rift with the Doom VFR and Fallout 4 VR releases, probably due to the ongoing legal battle between Zenimax and Oculus, Skyrim VR is getting an official Rift release—at least, if the Steam page is anything to go by. Miracles do happen. (Now place bets whether it’s because Oculus has finally sold more hardware than the HTC Vive, or whether it’s because the VR install base is too small for Bethesda to recoup costs on Vive alone.)

You know what’s not releasing April 3 though? Pillars of Eternity II: Deadfire. Not anymore, at least. We’re just a scant few weeks away, but Obsidian’s made the call to delay the game to May 8 instead. Also it’s Obsidian we’re talking about, so a delay should probably be the least surprising news in the world. Be glad it’s only a month.

The Goat Simulator team at Coffee Stain Studios is working on a new game, and this week released maybe the most cryptic teaser I’ve ever seen. It’s uh...a lizard...eating...and then some construction noises. And that’s pretty much it. The game’s titled Satisfactory and according to this press release will be “done when it’s done.” So yeah, look for that someday.

This rumor’s been so pervasive it pretty much seemed like a done deal, but this week we got confirmation: Geralt of Rivia, famed Witcher of The Witcher, will guest-star in Soulcalibur VI when it releases later this year. It looks like Witcher stronghold Kaer Morhen will also make an appearance, as a stage for players to fight in. Way cooler than when Spawn was a guest character.

Tropico has always been a pretty campy series, but I have to say the upcoming Tropico 6 looks like it’s leaving behind the bounds of reality entirely. There’s a new trailer out showing off the game’s palace customization features, the fact you’re ruling multiple islands, and—most importantly—the fact you can apparently steal any iconic monument the world over. The Sphinx? Sure. Statue of Liberty? Absolutely. Saint Basil’s Cathedral, with its multi-colored domes? Yup. Colosseum? Check.

Valley of the Kings

Assassin’s Creed: Origins released its second and final expansion this week, Curse of the Pharaohs. New map, new level cap (55), bearded Bayek, and more. Looks like you’ll be traveling into the land of the undead to fight resurrected mummies and maybe the gods too? Or maybe just people mummies dressed up like Anubis—hard to tell. Also, a giant scorpion, which I think makes this the official Scorpion King sequel we’ve all been waiting for.

I’ll admit, I’m looking forward to The Crew 2. I thought the first game had promise, and if Ubisoft properly re-tunes the progression system and racing physics, it could plug the hole Need for Speed’s continually failed to fill the past few years.

That's a pretty big “If,” but we won’t have much longer to wait: Ubisoft announced a June 29 release date this week, so we’ll all be hopping in our cars/planes/speedboats soon. Also they did the date in faux-skywriting, which is clever.

Sea of Thieves is out next week! Like, actually out! And if you’re still wondering what you do in the game...well, so am I, even though the Sea of Thieves beta was a rip-roaring time. But hey, the launch trailer has a look at the Kraken, and that’s properly terrifying.

Okay, so: Imagine there’s an entire solar system out there to explore, but you only have 20 minutes in which to do it. What do you do?

That’s the gist of Outer Wilds, a spacefaring game full of ancient cities, alien ruins, and also a time loop that warps you back to the start every 20 minutes. “The planets of Outer Wilds are packed with hidden locations that change with the passage of time. Visit an underground city of before it's swallowed by sand, or explore the surface of a planet as it crumbles beneath your feet.” It’s pretty damn cool sounding, and thanks to a new publishing deal with indie darling Annapurna it looks like it’ll actually release later this year. There's a new trailer too.

We’re rapidly running out of Dark Souls gimmicks for people to attempt. It’s been beaten with a Rock Band guitar. It’s been bested by someone playing the Donkey Konga bongos. It was beaten by Twitch chat. And now, all three games have been beaten in one massive run—without taking a single hit in any of them. Twitch streamer The_Happy_Hob finally completed that challenge this week, after months of trying.

I can’t even imagine.

One last story: You might’ve heard Stephen Hawking died this week. What you might not have heard is that legions of EVE Online players paid tribute to the cosmologist by lighting flares all across New Eden. It appears to have started with a thread by Reddit user kairiola, and spread from there, with dozens of flares eventually lit. Beautiful. (Via PC Gamer)