Hands-on: Destiny 2 running at 4K is one of the prettiest PC games ever

We recorded our demo so you can bask in the glory, too. 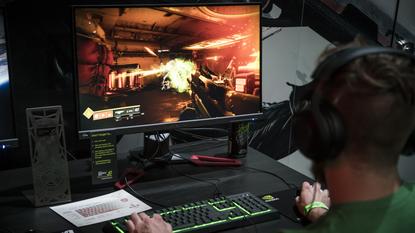 Destiny 2 is the best-looking PC game I saw at E3.

I’m more than a little surprised to write that—after all, the first game didn’t even make it off consoles. Hell, Bungie hasn’t even had a game on PC since Halo 2. I expected, at best, a workmanlike console port with a few more bangs and whistles around the edges.

But not only is Destiny 2 the best-looking PC game I saw at E3, it’s one of the best-looking shooters I’ve seen on the PC ever. We got the chance to go hands-on with the game in Nvidia’s booth, on machines running an Intel Core i7-7700K, an Nvidia GeForce GTX 1080 Ti, and piped through an Acer Predator IPS display at 4K, 60 frames per second. We’ve embedded a video of our entire demo further below so you can see if for yourself.

Gorgeous and nonsensical—at least to me. I never finished the original Destiny, never went back after Bungie supposedly “fixed” the story, fleshed it out with expansions, and all that. I remember Peter Dinklage awkwardly drawling his way through a “That wizard came from the moon” line or whatever in the beta, and that’s about it.

Not the best first impression.

So I feel like I arrive at Destiny 2 at something of a disadvantage, at least so far as the story elements go. I can tell you Lance Reddick voices one of the characters—I’d recognize his smooth and menacing voice anywhere. I also killed a bunch of Red Legion, hulking gorilla-like enemies in spacesuits, with military ranks apparently stolen from the Roman Empire.

I don’t know who I am or who these characters are though, nor what the stakes are. Throughout the demo, a host of ships advanced threateningly on some far-off moon—a beautiful sight, an awe-inspiring spectacle, but meaningless without any context. It all seems interesting, but it remains to be seen how Bungie is going to on-board people who missed the last three years of Destiny. Though to be fair, Destiny’s grimoire card system of storytelling likely means there are plenty of people who did play the game that also have no idea what’s going on.

What I can speak to is the technical aspects. There’s no context needed for that.

And as I said, Destiny 2 is stunning on PC. We’ve embedded a direct capture feed of my demo here so you can see for yourself the game running at 4K, 60 frames per second. (Adjust the stream resolution if you’ve got a compatible monitor!) Like I said: It’s beautiful. The weather is particularly impressive, with rain winding its way down the camera. Another excellent effect: the way enemies burst into sparks whenever you melee them. I found myself trying to get into melee distance all the time just to see that effect.

The guns feel good too, despite the bullet-sponge nature of Bungie’s Halo-style combat. I didn’t know how it would feel without a mouse and keyboard, and I will say the game seems quite a bit easier than it probably is on a controller.

But guns feel suitably powerful, even as you chip away at a boss enemy’s golden health bar. It’s far better than, say, The Division, where every rifle felt like a pea shooter. It helps that The Division’s sci-fi guns aren’t in any way supposed to be “realistic,” so you don’t really spend time wondering why your sniper rifle doesn’t automatically drop enemies to the ground.

Anyway, I went into our Destiny 2 demo with zero expectations and zero real interest, and came out at least curious to see how the game translates to PC. Don’t judge a book by its cover obviously, but a very pretty 4K, 60 frames per second cover definitely helps.

We’ll have more to say as Destiny 2 approaches its PC launch date. I’d particularly like to do a deep dive on how it differs from the console version. If you buy a GeForce GTX 1080 or 1080 Ti between now and June 27, Nvidia will toss in a free copy of Destiny 2 on PC when it releases, and early access to the multiplayer beta in August.

Stay tuned for more from E3 2017 as we wrap up the week’s coverage—there are more hands-on previews and videos still to come.