Roving Rachel does Seagate in Singapore

What to do with all those naked selfies? 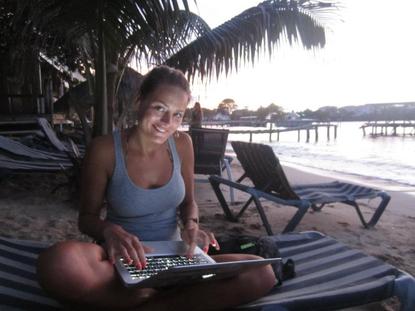 Roving Rachel in her natural habitat.

For those who have wondered where I had gotten to, or why I hadn't been posting much (read: at all) there's a reasonable explanation. A few months ago I made the decision to run away from the circus that is yachting and gallivanting around St. Barts and St Tropez and instead I flew back to a city I hadn't lived in for over 15 years. Back to little old Auckland. It’s all a learning curve, right?

Which brings me to the position I am currently in. Seat 36A on a flight to Singapore. En route to a conference on hard drives. Hard drives? What do I know about hard drives? I know I have about eight of them all from various times in my life. I have almost annually backed up my laptop with a new portable hard drive only to throw it in a box to forget about it. I found all those hard drives just last month when I moved “home.” I haven't yet mustered the courage to look through them all. Naked selfies from when I was a 20-something will have to just wait.

Hard drives hold memories that we love and never want to forget, the ones we hold close to us, beach holidays, birthdays, family get-togethers… but they also hold a lot of heartbreak. Ex-boyfriends, frenemies, pets that have since gone to live on puppy farms in the country (that is a thing, right? – I hope not - Ed) So I’m a little apprehensive to open up these Pandora boxes of gigabytes and terabytes.

I’m spending 3 days in Singapore learning all about Seagate technologies. The world's biggest producers of information technology storage systems boasting a market share of 40% of all hard disk drives in the world. Toshiba and Western Digital make up most of the rest of the market share. If you were to stack the disks made each day by Seagate on top of each other, the stack would be higher than the world's current tallest building in the world, the Burj Khalifa in Dubai.

Just how much work goes into these disks is astounding. For around $120 you can buy a Seagate portable hard drive with 2TB of storage. The testing that the Seagate drives go through before reaching our grubby hands include testing the disk at altitude, in a soundless chamber, in hot and cold temperatures, varying amounts of humidity, electromagnetic chambers, various drop heights … oh, and if that wasn't enough, they also get taken on a journey of 1000 G forces. A Red Bull pilot flies with 10G’s. Seagate wants to make sure its product is high-quality and strives to ensure its testing facility is the best in the world.

Shugart is a $100 million dollar complex, built in Singapore in 2015 and used for sales, marketing and testing facilities for Seagate's multi-billion dollar empire, it boasts a spacious open plan design. Communal kitchens allow staff to interact on each floor before settling into an informal table discussion or meeting. The space has a calming flow, which is a stark contrast to the mechanical sanitised conditions in the manufacturing facilities around the world.

The data storage that we use currently will pale in comparison to what is to come. We are actually creating data in ways that the human race never has before. How many devices do you own? Two? Four? Five? I’ll bet you haven't even counted. I had never considered how much data I produce and save every year.

Then I heard that by 2020 the number of devices “we” are going to have, that need data storage solutions are estimated to be around 11.2 devices per person. Sounds ludicrous right?

Think about this: You have a phone for personal use, one for work, a tablet, a laptop, a work computer, a smart TV, a smart car, a drone, an Xbox, a camera, and throw in that virtual reality system your kids convinced you to get for Christmas and who knows what else. Suddenly in 2017 it’s totally normal to have many items connected, storing and using data.

Which brings me back to those eight lonely, but full, hard drives of shame, packed away in my cupboard. Portable hard drives will still be used for a long time yet. However, cloud storage is starting to surpass HDD as a preferred way for consumers to store data.

Seagate’s Portable Cloud can automatically and continuously back up all your computers through WiFi and it is compatible with Apple and regular PCs. You can easily transfer files between the cloud, Dropbox or Google Drive. It is also a breeze to use in conjunction with a Roku Player, Samsung Smart TV or Blu-ray Disc player.

At $240 for 3TB it's a great solution for personal and small business storage. It gives you greater control over the data you have stored and the accessibility functions.

Of course, you still need to back up the information to a secondary source, but the security of the personal cloud device is encrypted and in your own safe hands.

I’ve already cancelled my Apple iCloud subscription and will buy the Seagate Personal Cloud. Anything that consolidates and removes those eight hard drives of shame from my life can only be a great thing. And no, the data on them won’t be hacked and released anytime soon. Seagate has my back [Get that in writing – Ed].